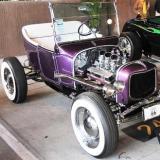 As noted in our earlier post about Tweedy Pie, this historic T-Bucket was originally sold by it’s builder, Bob Johnston, to Ed “Big Daddy” Roth for $1150. By early 2007, when stupid money was bidding up every hot rod of any significance, it sold for $335,500. Here’s how Tweedy Pie was described in the RM Auctions catalog (I’m still not buying that the body was widened 3 inches):

– First built by Bob Johnston, updated by Ed “Big Daddy” Roth
– An early, show-winning and trendsetting “T-bucket”
– Immortalized in over 11 million scale-model kits
– Restored to its Ed Roth circa-1962 configuration

When Ed Roth returned to Southern California in 1955 after service in the U.S. Air Force, the hot-rodding boom was now in full swing. His first show car, “Little Jewel,” was quickly succeeded by the more radical “Outlaw” T-bucket in 1956, which set the tone for many of Roth’s future projects and greatly influenced hot-rod design. One of Roth’s contemporaries, Bob Johnston, seized upon the outrageous T-bucket concept even earlier, creating the basis of this car, ultimately known as “Tweedy Pie.”

Johnston’s initial build spanned 1954 and 1956. The body was widened three inches and channeled four inches over bobbed Deuce frame rails. A built flathead V-8 provided power. Johnston, a local aircraft instrument mechanic, fitted the car with remarkably complete instrumentation. Once the metalwork was complete, over 40 coats of lacquer were applied in Bob’s garage by his nephew Dick, with the custom-mixed purple hue inspired by the packaging of Union 76 Royal Triton motor oil. In 1958, Ed Roth added his signature pinstriping.

The flathead gave way to a ’57 Corvette-spec 283 with a single four-barrel carburetor prior to September 1959, when the T-Roadster was named “Best Roadster” at the first and only “Disneyland Car Club Day and Autocade” in Anaheim, California. In December that year, it was the Rodding and Restyling cover car. The producers of the TV series 77 Sunset Strip had originally wanted to use Bob’s car, and a contract was even signed, but Bob ultimately could not allow anyone else to drive his beloved creation, paving the way for Norm Grabowski’s ’25 T-roadster to gain national fame.

Keeping his car on the leading edge, Bob added a polished Offenhauser intake manifold and six Stromberg carbs to the Corvette V-8 and chromed the rear-axle center section. In 1962, Ed “Big Daddy” Roth purchased the car for $1,150 and added quad headlights, chrome-reverse wheels and “baby moon” hubcaps. Contrary to popular belief, Bob, not “Big Daddy,” added the rear nerf-bar bumper. Once updated by Roth, “Tweedy Pie” hit the cover of the March 1962 edition of Rod & Custom and gained massive fame in Revell 1:25 scale model kit form, selling 3.5 million copies in its first year and over 11 million to date!

A couple of years later, “Big Daddy” sold “Tweedy Pie” to Chris Lovoy, who added some modifications, including a pair of rear fenders. Later, the iconic T-roadster was acquired by Larry Tarantolo of Custer Park, Illinois, who returned the car to its present Roth-era configuration. The enduring influence of “Tweedy Pie” remains profound today, nearly 50 years after Ed Roth acquired and modified it. Its longevity on the show circuit and in the public consciousness remains a testament to its inspired creator, Bob Johnston. As offered, “Tweedy Pie” remains both a groundbreaking show rod and a wonderful survivor from that unique period during the 1950s and early 1960s, when unbridled automotive creativity reached critical mass in Southern California.