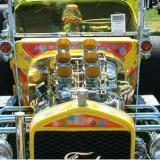 I could be accused by some as being taste-deficient, because I’m a sucker for the late 60s/early 70s psychedelic paint jobs, which incorporated panels, fogs, fades, bursts, lace, cobwebs, ribbons, stripes, murals, etc. in flakes, pearls and candies with the net result being sensory overload. While at the 2010 Buckethead Bash, sponsored by Spirit Industries in Mountain Home, Arkansas, I was immediately drawn to a yellow T-Bucket with a gumball-themed psychedelic paint job right out of the past and just had to capture it on video. 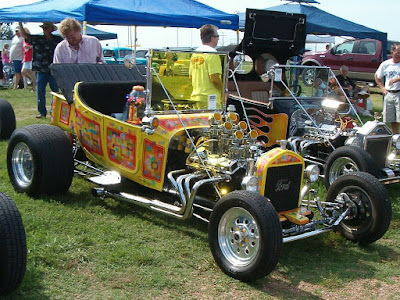 This is a very nicely constructed T-Bucket with lots of chrome and its coil spring rear suspension configuration would lead me to believe this bucket was probably built in the 70s — but has certainly been updated much more recently. The yellow-tinted windshield is yet another hot rod and drag racer design element from the era that adds nicely to the overall look. But, the sweet icing on this MacArthur Park cake is the unique six deuce treatment that uses two different height carb spacers to achieve a very dramatic tiered effect for the carbs, so that a front view looks a bit like a circus caliope. 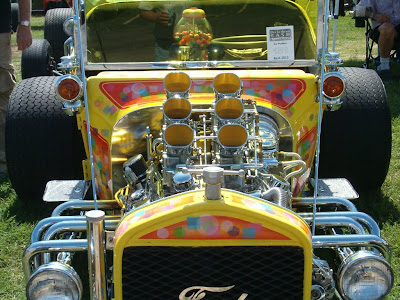 2 thoughts on “The “Gumball Machine” T-Bucket”