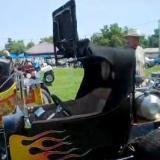 While checking out all the T-Buckets at the 2010 Buckethead Bash in Mountain Home, AR, a beautiful black T-Bucket with flames caught my attention for several reasons: the overall look, the incredible detail — and “what’s up with that top?” I decided to spend a little more time with this one and took a short video. Sure, there are a lot of black T-Buckets with flames out there but this one really transfixed my eyes, much like a fine diamond, because of the high level of detailed craftsmanship embodied in its overall construction. 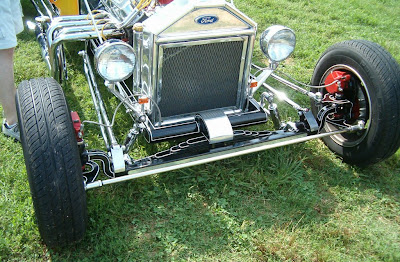 < To be quite honest, it was still relatively early in the day and I'd already driven for several hours just that morning to get to Mountain Home. Add in the heat and humidity, and I was one addle-brained bucket lover. Initially, I looked at the articulated top and admired its sophisticated mechanical construction, with levers, gas shocks, latching cables and more. "That's cool" I said to myself, "but you can't go down the road that way and if you want to let the sun in or see the sky then why not just take the top off or down?" I continued my videoing anyway and was impressed by the pinstriping on the suspension elements that really helped set off the overall look of this bucket. I was even curious enough to ask about the little chromed rack attached to the roll bar above the gas tank and learned from a friend of the owner that it wasn't for fuel tank protection, but was a saddle where he strapped in his folding chairs. Told you I was feeling particularly dense in the morning heat. 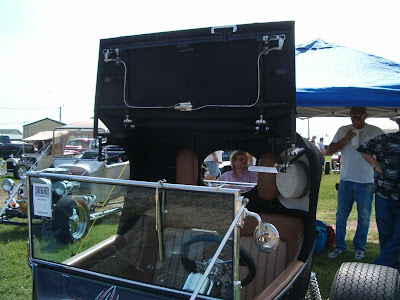 < Anyway, it wasn't until I got back into an air conditioned vehicle and started cooling off on the long trip home that it hit me -- the top lifts up to make it easier to get in and out of the T-Bucket! Doh! For all us past middle-age bucketheads faced with no doors, how clever is that?! As the cool air continued to stimulate my brain which had gone almost into sleep mode in the heat I also realized that I'd seen pictures of this T-Bucket and its unique top a couple months ago on the "T-Bucket Forums". Now I'm curious whether this T-Bucket innovator is offering this kind of top mechanism for sale. One would think there would be a nice specialty market for it, although given the lack of uniformity in T-Bucket soft tops it might be quite a niche. Oppressive heat notwithstanding, I really enjoyed the opportunity to spend some time checking out this very nicely done T-Bucket. Hope you enjoy it as much as I did -- and be sure to post a comment if you have more details on the top. 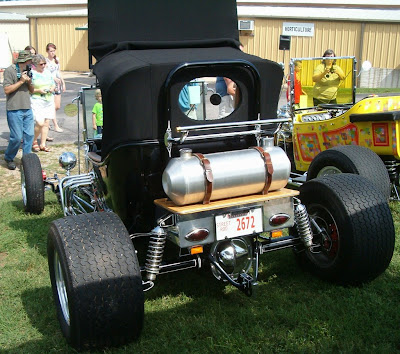