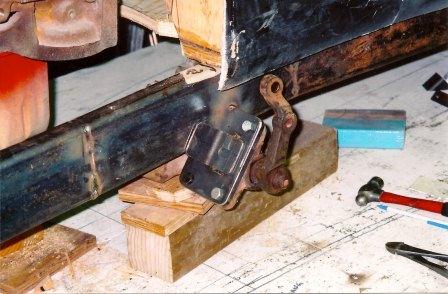 In this installment in our series Bob Hamilton of our popular StreetRod 101 DVD series tackles T Bucket steering rather simply with a vintage Mustang steering box and also shows how to construct the transmission crossmember. “I like to use the Mustang box for T Bucket steering because it’s fairly modern, reliable and readily available. Here’s the Mustang steering box tacked in place – mounted on its side. I tacked a small piece of angle iron to the mounting bracket to help hold it in place.” “This just shows a rear view of the box mounted to the frame.” “I drew the trans mount on the bench top so I could get the right angles for the center cuts. Inch and a half square tubing heavy wall (.188 in thick ) was used with urethane bushings being used for the cushion mount itself. The trans is bolted directly to a plate welded to the tubing.” “Two 3/8ths 2 x 2 plates are used on each end of the mount to support the T Bucket transmission mount.” “Here’s a rear shot showing the mount and transmission (empty turbo 350 case) all set up. Notice the plywood firewall in place to simulate the body in place. I screwed a small 2 x 4 to the plywood so that I could use c-clamps to hold it to the frame. I marked the position of the firewall when the body was setting on the frame the last time. That then becomes the reference point.” “Another shot showing everything in place and the spacer blocks removed.”

That was a brief T Bucket steering installment. But, if you’d like to see how Bob does this in more detail we highly recommend his 4-1/2 hour StreetRod 101: Hot Rod Frame & Chassis Construction DVD which is part of the informative and comprehensive StreetRod 101 DVD Library available at our sister site, StreetRodPlans.com.

Thanks for following along so far on this cool 1927 T roadster series. Stay tuned and check back regularly because we’ll be adding more soon.