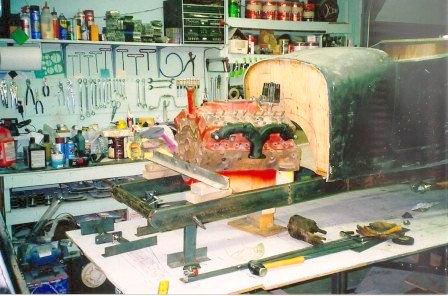 “Moving to the front of the frame, it’s time to set the engine and transmission in place. There are lots of ways to do this, I have probably tried all of them. The best way I have found to set the engine is to use a piece of 1/4 in by 2 inch angle or 3/8ths by 2 in. Locate the lower front motor mount hole in the front. I only build with Chevy engines. If other engines are used , a similar process can be used. Right now – I am going to use side mounts to see if this is the way I really want to go. Under the pan I have placed some blocks to support the rear. I am going to use an early Mustang steering box mounted on its side , so I have to do some mock up to see if this is going to accomplish what I really want.” “I’m also using traditional ram horn exhaust manifolds because I think they look cool. I’ve set the body back on the frame to check everything out. As this is basically a high boy roadster (only channeled 3/4ths of an inch), I found that the engine sat too low. Out comes the two by fours and now that looks better – engine manifold to center of the cowl. This type of set up allows me to center the engine in the frame and set the distributor to firewall clearance that I want. I usually set the engine so that I can put the meaty part of my hand,flattened out, between the distributor cap and the firewall.” “Now step back and see if the whole thing looks proportional . If not, readjust your T Bucket engine positioning and check again.”

That’s all for this short “how to” on T Bucket engine positioning. It’s truly fascinating to actually watch Bob Hamilton build a frame like this and his 4-1/2 hour StreetRod 101: Hot Rod Frame & Chassis Construction DVD which is part of the StreetRod 101 DVD Library is now available at our sister site, StreetRodPlans.com. If you haven’t already begun collecting this valuable DVD library, just click on the image below and check out all that they cover.

And thanks to everyone’s positive response to this fun series we’ll keep the updates coming. Just be sure to check back frequently.