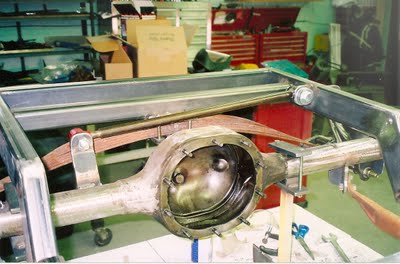 “On to the rear panhard bar. I make them simple and functional. I build my T-Bucket panhard bars from 7/8ths heavy wall .188 tubing – the same as I use for homebuilt radius rods, drag links, and tie rods. The bracket on the rear axle housing is bent towards the top to align it with the single bracket off the frame.” “I use 3/8ths x 2 inch for both and set the axle bracket just past the center of the pumpkin by about 6 to 8 inches. Both ends of the T-Bucket panhard bar have urethane rod ends, one solid and one adjustable. When final assembly takes place, install the front and rear panhards after everything else is in place (loaded). If you don’t, it can cause quite a bind in the suspension.” “Rear and front shocks are pretty much straight forward, since the frame is unloaded, I set the angle at 26 degrees. When the frame becomes loaded, the shocks will settle to 30 degrees and give a pretty decent ride. The more vertical the shock, the stiffer the ride will be.” “Here is another close up of the rear spring mounted and the shock tacked in place. I used only one bracket, 1/2 in by 2 inches wide and whatever the shock bolt size is. In this case it is 5/8ths inch diameter. Also notice how I hold the rear end up and in place with my homemade stands.” “This picture shows the T-Bucket panhard bar and the crossmember and spring perch for the rear end.” “More detail of the rear, this shows the angles used for the T-Bucket panhard bar bracket on the rear end. I make these brackets in two pieces because it is easier to get everything true, square, straight the first time. If I were to heat and bend, I could wind up heating and bending several times before getting it the way I want it. I used to use the hot wrench method, but the two-piece method is actually faster and more accurate.”

You can actually watch Bob build a panhard bar assembly and everything else that goes into a hot rod chassis in his informative StreetRod 101: Hot Rod Frame & Chassis Construction DVD that’s available at our sister site, StreetRodPlans.com.