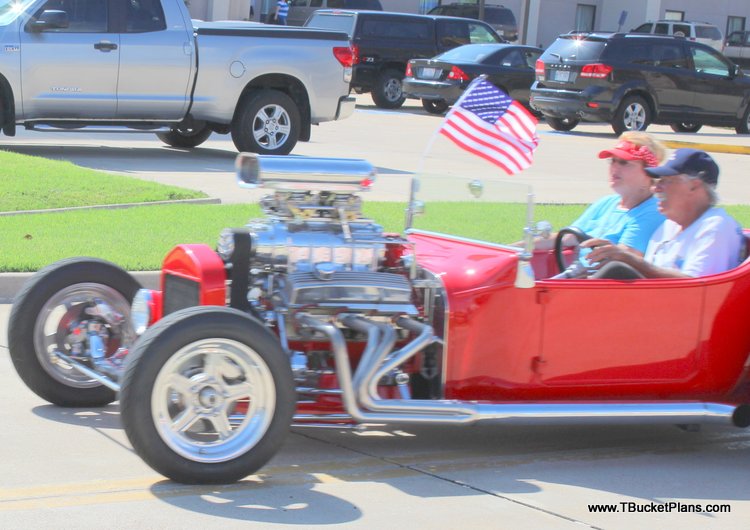 One particular red T Bucket roadster stopped me in my tracks at the 2014 T-Bucket Nationals in Mountain Home, Arkansas, and I don’t think you’ll have to look very long either to understand why. Turns out that this beauty of a T-Bucket was built by Dan Clare of Whittier, California. It is the result of a 2 1/2 year build by Dan and he noted that he still wasn’t finished. What’s truly amazing is that this is Dan’s first T-Bucket build! He’s undoubtedly done his homework well because this red T Bucket is a study in unique details that are very tastefully accomplished. Take a look at the beautiful interior that has one of the cleanest, sharpest T-Bucket dash treatments I’ve seen. Even a glove box! The center console is functional, of course. To allow that super low stance the driveshaft has to go somewhere and there’s even more function to it that we’ll get to later. The white and red rolls and pleats are the perfect complement to the flawless red finish. Up front, I really like how the axle with its modest drop aligns with the front crossmember and how the axle hides the spring shackles and perch bolts. Dan gets the front end lowness with the raised spring perch. From the driver’s side you notice the nice, wide door Dan has fashioned for easy entry and exit and how it blends nicely with the smooth sided T-Bucket body. The chromed header extensions below the doors contain 36″ glass pack mufflers to keep things throaty but still at a reasonable sound level. The more you study this pic, you begin to realize just how fascinating this red T Bucket is in terms of planning and execution. Dan’s T is so low that the primary occupant of the pickup bed is the rear axle, which is suspended by coil-over shocks attached to the beautifully curved rear kickup. The rear axle is stabilized by a triangulated 4-bar arrangement and you’ll note that the interior center console provides room for attachment of the top two stabilizer bars. With space at a premium, Dan has designed and built two very nice 4 1/2 gallon fuel tanks that are on either side of the differential. Very clever, huh? The worm’s eye view under the pickup bed shows the twin fuel tanks on either side of the driveshaft, the lower 4-bar and coil-over shock attachment to the rear axle. The passenger side also has a nice wide door and you’ll see that this is no bare bones T with the emergency brake and turn signal levers visible, along with a nice complement of mirrors for driving. You’ll recall I was struck by the lines of Dan’s red T Bucket and the above photo shows them perfectly, with the front 4-bars aligned with the frame, the headers following a nice straight line to the rear and how even the carb scoop above the supercharger is lined up above the short, vertical windshield, which aligns perfectly with the T grille shell. If that’s not enough, note how the valve covers are aligned with the body molding. More of Dan’s incredible attention to detail. Note how the 4-bar brackets are fabricated to appear molded into the frame. Have you ever seen a functioning cowl vent on a fiberglass T-Bucket body? And check out that cleanly fabricated throttle linkage. More incredibly clean execution with the motor mounts and steering box mount. Another subtle, super clean touch is no mounting bolts on the bottom part of the windshield posts. Take a look at some of the shortest shocks you’re ever going to see and while you’re at it explore the molded look multi-function bracket for attaching radiator support, shocks, headlights — and if you look closely you’ll see the turn signals mounted there, too! Sure, it has an absolute beauty of a blown small block, but with all the other incredible details you’d expect nothing less. Not in the weeds. Rather, in the grass. Dan’s red T Bucket was built with an awesome 3″ ground clearance. Dan’s choice of Billet Specialties wheels and matching big and little tires is just perfect, too. To say I’m impressed by what Dan Clare has done in building this red T Bucket study in near perfection is an understatement. It’s all about research, planning and execution. Dan’s growing collection of trophies is just a small recognition of what he’s achieved. The many admirers he draws at shows is the real achievement. I don’t know if he’ll be at the 2015 T-Bucket Nationals, but if you have a chance to see Dan’s T up close and personal you’ll find it enjoyable and inspiring.