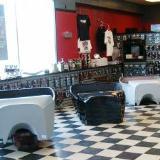 Late last year, we did a post on the Wintec Roadster, a bigger T-Bucket for the family (or big) man, and it generated a lot of interest from viewers to TBucketPlans.com not only in the new T-Bucket kit but also in Wintec’s rather complete line of T-Bucket chassis and suspension parts that are conveniently backward compatible with most Total Performance T-Buckets produced over the years. Based on the positive visitor response, we decided to make a “shop stop” at Wintec Fabrication in Wallingford, CT to see what else we could learn. Pulling up to the Wintec facility, it’s immediately recognizable by the big “Hot Rod Parts” lighted sign above the doorway as the former home of Total Performance before its acquisition by Speedway Motors. Immediately upon entering, it’s obvious that this operation is devoted to T-Buckets based on the numerous fiberglass bodies on display and the walls lined with virtually every T-Bucket part one might need to build a complete T hot rod. All you’d need would be a roomy shopping cart — or two.

The parts are logically presented in groups, going from front suspension to rear and followed by engine-related. All of the Wintec-produced T parts are nicely packaged, labeled and displayed so that a shopper doesn’t have to deal with a counterman and his parts book retrieving things from the back room. In fact, you’re more than likely to make an impulse purchase or two seeing all the various brackets and suspension parts arrayed in such a manner that you quickly recognize something you need although it may not have been on your mind when you walked in. Heck, somebody had even just bought the display T-Bucket frame off the floor before my arrival. In terms of the wide variety of T-Bucket and hot rod parts made by Wintec, their pinion-mounted mechanical emergency brake is a popular item that adds safety and value to just about any T-Bucket. In our earlier story on the Wintec Roadster, you may have caught a glimpse of the sharp looking upholstered bomber seats it used and those are now also available from Wintec. In addition to a nice variety of T-Bucket bodies on the showroom floor, they also carry a complete line of all the other fiberglass parts a bucket builder might need: pickup beds and gates, turtle decks, Deuce and T grille shells, transmission humps, cycle fenders and seat inserts. Of course, as also noted earlier, Jim Wilkos also owns the Cool-Flex enhanced performance and looks radiator hose line which is on display as well. Wintec owner, Jim Wilkos, took the time to explain some of the finer points of their new Wintech Roadster body, which is made up of three layers of hand-laid 2 oz. material. A unique feature, which you’ll recognize if you’ve ever built a fiberglass T-Bucket, is that the body is built so that the windshield posts fit perfectly — meaning no more fiberglass build-up to make them fit upright. Back in the shop area, they had one of their new frames ready to go with a Wintec Roadster body. The chassis uses a 3 inch kickup at 30 degrees for a nice overall conservative rake profile. In addition, the chassis includes a K-member which does double duty reinforcing the frame and also supporting the floor. On this particular chassis you’ll note they’re using hydraulic, rather than friction shocks because Jim pointed out that the friction shocks really work best with something light on the front like Hallcraft or Dayton wire wheels and that the Radir 12-spokes are about the upper limit in terms of weight with the friction shocks. I was really eager to see how they handled the fuel filler being able to live with the rear seat on the Wintec Roadster in light of the fuel tank being located under the seat area below the floor, where it’s protected by the frame rails. You’ll note that with the great-looking upholstery treatment that one would possibly never know that that little seat divider served another purpose. A nice surprise awaited me while inspecting one of the Wintec Roadsters, in the form of the notorious Lady Luck II T-Bucket roadster owned by automotive photojournalist, Chuck Vranas. The original Lady Luck was built by Mickey Lauria and the Total Performance crew with flathead Ford power and in 1994 they built a near duplicate as Lady Luck II for Chuck with a big block Chevy and a gray interior and body-color top, rather than the white interior and white top used on the first Lady Luck. By the way, the color isn’t pink, but rather Light Lavender Pearl. Quite a treat for me because I’ve admired them both for many years.

So, if you’re in the market for a T-Bucket kit, turnkey car, parts to build your own or replacement parts for one you already have you’ll find it worthwhile to check with Wintec Fabrication regarding your needs. I took quite a few pics while I was there and decided to roll them into this slide show movie which will give you a better idea of the depth of their T-Bucket offering. Hope you enjoy watching it as much as I enjoyed my “shop stop” at Wintec.