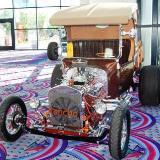 NOTE: The following is a reader submitted story. I first saw this C-Cab in the December, 1968 issue of Hot Rod magazine where it was featured as the “Untypical T” built by Doug Wachsman of Manhattan Beach, California. The story that follows is from a subsequent owner. My early years are getting a little dim just as my headlights were in 1923. Yes, I rolled off the assembly line at Henry Ford’s truck plant along with many other trucks. I wasn’t the smallest on the line nor was I the largest. I was designed as a light duty commercial truck with a flat bed for hauling materials. I don’t remember where I started my journeys, but I do remember times were much different and the roads were much rougher. I bounced around for nearly 30 years hauling things here and there. I remember the First World War. America stood strong and defended its beliefs, and some of my fellow trucks were put to use here in the States moving materials to and from plants to railheads, just doing our part. Made it through the great depression without much neglect. Boy, times were tough, people were struggling and didn’t have much for themselves but they kept me alive. Bouncing from place to place looking for work, hauling anything anywhere I could find, sometimes for 50 cents a day.

Then our country was called to defend itself again with the declaration of World War II. I was older by now, and could not stand up to the greater needs the newer trucks could fulfill so I was put aside. Proudly our country prevailed and our service people returned with pride. This pride brought back enthusiasm and the need to make our country stronger. People were looking for new places to live, start families, and find work. Route 66 became a busy highway, stretching from Chicago to Los Angeles. People were on the move. Ideas were strong and motivation was everywhere. Cars and trucks were starting to gain more appeal, even us older models. I am not sure where it started but someone saw us and decided we were worthy of this new thing called “hot rods”.

I was picked up in Phoenix Arizona in the mid-fifties for my new life as a hot rod. This was a new experience for me. I wasn’t looked at as just a truck to haul goods anymore; I was an early custom vehicle. Then in the seventies things really took off. I got this really “trippy” paint job. It was a pastel green with yellow ribbons painted on my cab. I got an infusion of power when a Pontiac motor was put between my frame rails with one of those automatic transmissions. I even got a rear end make over with a new Ford unit.

Yea, they even used an old Schlitz beer keg as a fuel tank to feed my new power plant. I was cool. So cool that in September 1975 Rod Action Magazine even took some pictures of me, and wrote some nice words and put me in their magazine for lots of folks to look at. Well as that was cool, my image was destined to change. I traded owners. The “trippy” days were over. Now I was made to look sinister with a black paint job, much like my friends who were starring in the Munsters on TV. I don’t really look at these as my dark days, I just think of them as a sign of the times. Later on during these times I was treated to another Pontiac power plant. This time a 455 cubic inch Pontiac motor with a turbo transmission. I even got a rear end replacement. I changed owners again. This time to an Army Ranger. Great times were had, cruising the Arizona highways and streets. I even remember some jaunts up and down Route 66 through Arizona and southern California. He took good care of me, but again my appeal was over-shadowed by the changing look of hot rods and I was tucked away into a garage for several years. I waited for the day the garage door would open and the sun would shine in and I could be on the road again. My day came again in 2010. My Army ranger had befriended the folks at CAM Auto Creations in Phoenix. A deal was struck and I was loaded onto the trailer for the short ride to the shop. I was strong, but time in the garage had weakened me. My wood had aged and paint cracked, and some of my chrome tarnished but again my future was bright. All of my parts were disassembled, checked, cleaned, rebuilt, repainted, recovered, and renewed. Sure some parts were left for austerity and to prove my age which by the way is 87 years. My name “Poncho” was affixed through my longevity of having Pontiac power between my frame-rails. My colors were changed using PPG custom color mixes, Poncho Gold and Bandito Brown. As you can see my electrical is covered with red spiral wrap and my spark plug wires are red MSD wires. These colors were chosen to depict my new blood to go along with my new colors and masterful airbrush work on the back of my cab. No, I am not the most beautiful custom car ever created, but I have withstood over eight decades of work and pleasure. I have seen many changes in the custom car world. I have no intention of being retired, I am a driver, I am not afraid of weather, nor the threat of the modern automobiles. I will be around for many more decades to come, so as I have tattooed on the back of my cab “Let it Be”. Thank you and enjoy your time at the show,
Poncho Postscript: The “show” Poncho mentions in closing is none other than the 2011 62nd Annual Grand National Roadster Show, where this hard-working 1923 Ford C-Cab won First Place honors in the Altered Rod Truck category for owner, Alan Mitchell of Phoenix, AZ. Congratulations!