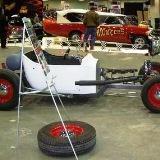 What is it attracting all the attention at the 2011 Detroit Autorama in the above photo? In the Midwest, the Detroit Autorama is the big show of the winter months. It draws huge crowds of hot rod and custom car lovers eager to get out of hibernation and see what’s creative and cool. This year, one of the big attention getters is none other than the “Hot Rod in a Box” T-Bucket kit of NEHR Speedcraft. Both Part 1 and Part 2 of our recent story on these well-engineered T-Bucket kits have garnered a lot of interest here at TBucketPlans.com, so I guess it’s not too much of a surprise that the appearance of one on the Autorama show floor has the same effect. Just so you’ll know what’s gathered the attention of the audience, we’ll include a couple of photos taken before the doors opened. What’s cool to note in the pre-show-opening picture above is the famous Dean Jeffries Monkeemobile right behind the T-Bucket in a box, which makes the crowd in front of the Hot Rod in a Box even more dramatic when you consider what else is in the area.