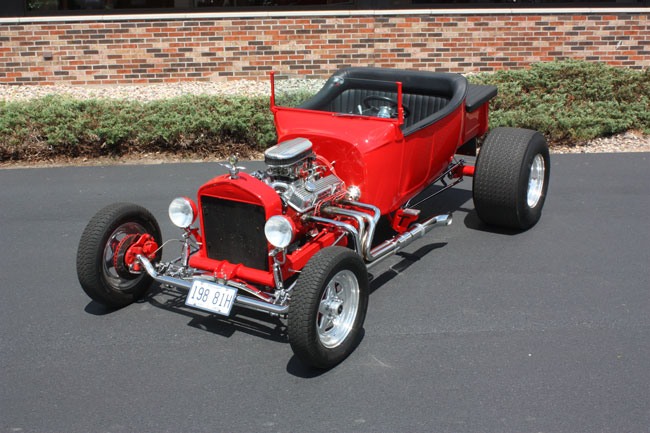 Having been stricken with T-Bucket fever at an early age, I’m always curious how others cure similar afflictions. That’s why I particularly enjoyed a recent Old Cars Weekly story about Dave Smith‘s interesting case of T-Bucket Fever. The author, Editorial Director Brian Earnest, was kind enough to let me share it with you. There was a silver lining to Dave Smith’s stay in the hospital a few years back. The Sedalia, Mo., resident got sick and had to spend a few days as an in-patient fighting pneumonia.

It was at the same time he was fighting pneumonia that the affable Smith found himself also stricken with a case of “T-bucket Fever.”

Smith still blames all the down time he had in the hospital for his decision to build his own custom roadster. And once he got started, it didn’t take him long to put together his splendid little 1923 Ford T-bucket. “I was in the hospital and I was looking at car magazines and looking for something neat to do,” he said. “I started sketching some things out and this is the result.

“Twenty-one days is how long it took us to do it, once we got started, and we were actually held up by the body man. He painted it Chevrolet Torch Red, and he wasn’t satisfied with it, so he painted it again, and it came out very nice. I was really happy with it.” Smith insists he wasn’t in a huge hurry to get the car finished, but he knew exactly what he wanted, had plenty of help, and ran into no big road blocks along the way. T-buckets, of course, come in all sorts of wild, and often comical variations. Smith, though, wanted the cleanest look he could get.

“You see all kinds, but they’re all variations of the same thing,” he says. “But I think you can go overboard. We tried to keep it clean and simple. In fact, the windshield is more for looks than it is for comfort [laughs]. You get to wishing it was a little taller sometimes when the wind is hitting you and you are getting a little slumped down in the seat. But it looks good, don’t it?

“But a taller windshield would kind of spoil the look we were after: a clean, clean car.”

Smith estimates he’s had his custom roadster about 10 years, and he’s already driven it more than he expected. Last summer he made the journey from Missouri to Wisconsin for a big T-bucket meet. He and group of fellow ‘bucket enthusiasts also made stop at the Iola Old Car Show in Iola, Wis. It was more seat time then he ever planned on when he started making sketches. “I wanted it to drive it, but it was going to be pretty much a local cruise car. [Comfort] was secondary,” he says. “The look was the No. 1 thing we were after. And I thought then that we’d probably just cruise the drive-ins a little around town and that type of thing, but then we got into the T-bucket Alliance…. And they have national events all over the country, so we started going on the little longer runs.

“It might be time to build something else and put a little taller windshield and stuff on it.” Anything goes with today’s high-tech T-buckets, but the original stripped-down Ford Model T’s from hot rodding’s early days were anything but flashy. Young men began cutting up, rebuilding and facelifting the family’s Model T Fords as far back as the 1920s. The T-bucket moniker originally referred to the two-seat Model T roadster body, with either a small pickup box, turtle deck or no back end at all. By the 1950s, fiberglass Model T roadster bodies were being reproduced as the number of usable original steel bodies began to dwindle. When small-block V-8 power came along, builders found even more fun ways to construct their creations.

It wasn’t until a memorable and slightly goofy TV character named Gerald “Kookie” Kookson on the series “77 Sunset Strip” drove one into American living rooms that the T-bucket was exposed to the masses. Kookson, played by Edd Byrnes, was the valet at a club called Dino’s and the hippest cat in town. In addition to speaking his own ultra-cool language, Kookie drove a stunning, flamed-out T-bucket built by customizer Norm Grabowski. Kookie and his car both became huge hits, and a generation of imitators followed. In addition to their sex appeal and radical style and personality, one of enduring traits of the T-bucket has been its relative affordability. Sure, you can go over the top with oodles of chrome, expensive custom paint and upholstery, and all kinds of ornate fabrication. But it’s always been possible to go cheap, too. Get your hands on a simple engine — even a four-cylinder will do — a ladder frame and a two-seater cab and you’re on your way. Slap on some headers, add a bench seat, grille shell, and some way to steer the thing and you’re almost there.

“Mine’s a ‘23 T body — a Speedway (Motors) body — and a lot of the parts are Speedway parts, Smith said. “I built the frame. It was done by a kid there in Sedalia. It’s a simple ladder frame … we started with the frame first. Then the body we ordered it and just set it on for a trial fit as we were building. I have a friend who’s a welder and works at a machine shop. He did the welding. I can do it and stick it together, but he can make it look good. The body we channeled down over the frame. It’s got coil-overs on the rear and leaf springs on the front — conventional style.

“There’s not a lot to it. It’s got a nine-inch Ford rear end. It’s got a 350 Chevrolet [V-8] with a 350 transmission — Chevrolet as well. I bought the engine just from a guy who was selling a 350 with a 350 transmission. We cleaned it up a little bit and freshened it up. The headers are a sprint car system. The pipes are kind of twisted around to keep them all the same length. The back one is the same length as the front one…. It sounds healthy!” The roadster shifts through an automatic shifter located on the column. The black interior was pieced together by a local one-man upholstery operation, and the simple gauges are “whatever … I’m not sure. They whatever looked good,” Smith chuckles. Mustang disc brakes do the stopping at all four corners.

Smith resisted any temptation to decorate the roadster with any striping, flames or other artwork. He liked the bright red paint just the way it was. “It’s a pretty neat clean look,” he says. “That’s what we wanted and that’s what we got.” Smith has another 1933 roadster that he and his wife Dianna use often, sometimes driving as far as the Pomona Roadster Show in California. “We have other cars that we drive, but we drive this one pretty often, too,” he says. “We take it to a lot of the local cruises and use it around town.”

Even if he builds another T-bucket roadster — or several — Smith doubts he would ever part with his red ’23. He figures other younger members of his clan already have dibs on it.

“I very seldom sell a car, so I guess we’ll keep it running,” he says with a grin. “And one of the grandkids wants it, so I’m sure that’s where it will go. I was glad to learn that experts now feel the old saying, “feed a cold, starve a fever,” may not be such good advice. Modern medicine has found that starving a fever by eating less may actually make it more difficult for your body to fight off the flu virus. So, it’s a good thing that Dave Smith chose to feed his T-Bucket fever. He has indeed achieved his objective of creating a “clean, clean car.” By the way, if you’ve got a craving to feed your own T-Bucket fever then mark your calendar for July 6-9, 2016 to attend the NTBA T-Bucket Nationals in Indianapolis, Indiana.