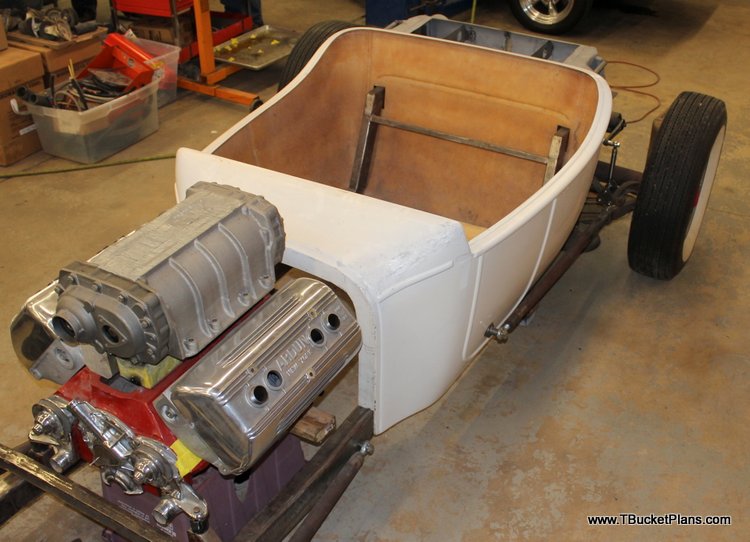 Our apologies to the crew at Fox Valley Hot Rods. They’ve been progressing with their Low T-Bucket project at a much quicker pace than our updates. On the bright side, though, we’ll have another progress report shortly after this one. So, let’s get with it and continue from where we last left off. Our first installment showed the initial mockup done by Matt Werksman and the Fox Valley Hot Rods team. It became clear early on that in keeping with the extreme low profile of this T-Bucket that a deeply dropped and drilled front axle should replace the initial stock I-beam. The one in the above photo is just there for comparison purposes — not positioning. 😉 You’ll also get a glimpse of the early drilled artillery-type steel wheels that will likely end up on the T.

Last time, we promised a look at how the interior comes together on such a down low T. Feast your eyes and let your imagination wander. Matt fashioned the frame to be contoured to the body lines of the T and it also incorporates supports for the firewall and eventually the steering column, which will be a real challenge given the width of the engine with the Ardun heads attached. Of course, the item of note in the pic above is how Matt has used one of his dad, Cotton Werksman‘s, tricks to enable the split wishbone radius rods to attach through the T-Bucket body. Seating will position one’s butt just inches above the pavement and another creative Cotton trick is employed to get the rear kickup exiting through the back of the body. The trick kick also permits a maximum amount of seating room in the tight T-Bucket confines. You can also see the progress made on the twin Jerrycan fuel tank which now has its baffles welded in. Coming up next will be a quickchange center section for the early Ford rear axle. And don’t think that the fuel tank will continue to rest on just a sheet of steel plate. The Jerrycans will allow a fuel supply suitable for decent cruising time, despite the thirsty supercharged Ardun with its octet of Stromberg 97’s. Of course, the traditional early Ford/quickchange rear axle assembly will get the equally traditional transverse rear spring along with some authentic early style knee action shocks. Another item from the initial mockup session that left Matt feeling as though something was missing was the traditional split wishbone front suspension. With Fox Valley Hot Rods being located in the country, despite Barrington, Illinois’ reputation as an affluent remote Chicago suburb, Matt drew inspiration from farm equipment in designing his own unique style of radius rods for this T-Bucket build. As the cardboard mockup illustrates, they’ll incorporate lightening holes in keeping with those on the front axle. And with knee-action shocks to match those on the rear. Matt then whipped up a full-size dimensional drawing that will be used to guide the one-off fabrication of these hefty looking, but deceivingly light radius rods. As the days pass by on the calendar, the pace of work on this project at Fox Valley Hot Rods increases and to stay on top of things and keep you current you’ll see much more frequent updates. This is a unique opportunity to follow along in the build progress of what will be a very uniquely notable T-Bucket build with strong traditional hot rod appeal. To be sure you don’t miss the next installment Subscribe to TBucketPlans.com RSS Feed