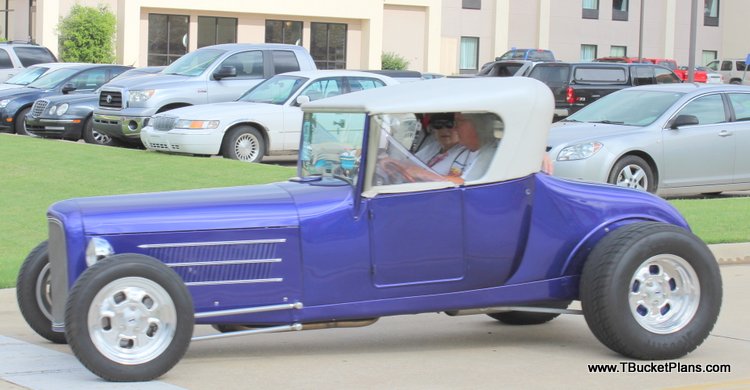 When you visit the T-Bucket Nationals in Carson City, Nevada, June 22-24, you’ll have a chance to see the super sharp 1927 T roadster that Charles Tunnell has owned since 1960 and which has clocked over 165,000 miles in the last 20 years cruising for pleasure and attending T-Bucket Nationals events around the country.

You should know, however, that although Charles’ T has been on the road in its current state since 1995 that it is no Johnny-come-lately to the street rod world.

It all started back in 1960 when Charles Tunnell was 20 years old and he built a very nice 1927 T roadster pickup powered by a potent small block Chevy engine. Charles was no stranger to powerful T’s, and around the same time also built and raced a wickedly fast fuel injected Hemi-powered direct drive fuel altered. In fact, Charles fabricated his own fuel injection unit back then and his little fuel altered turned 166 mph in 8.92 seconds in 1967.

So, it was only natural that as his 1927 T roadster for the street evolved it would acquire a GMC blower to up its performance to the next level. With that addition, and continued refinement of the other details the little roadster also became a show winner. As the 70s approached, like most hot rodders Charles’ priorities were diverted to other areas, but he still held onto his 1927 T roadster. Going from a supercharged roadster pickup to a sleek, turtle-decked track T is a bit of a journey. Charles’ incredible fabrication skills and initiative made it possible. The transformation got its start in the 1980s when Charles recognized what could be the basis for a fun, practical street rod with distinctive style. Charles was inspired by the “Father’s Day Ford” 1926 T roadster that the late Pete Chapouris built in the 1970s for his father. The concept was to build a street driven car that looked like a vintage track roadster. (1926? 1927? pretty much interchangeable) One of the early requirements for the transformation was to replace the pickup bed with a steel turtle deck. Of course, the rear suspension was updated along with the chassis. The front suspension was updated to a four bar and the frame was stretched for better ride and to fully accommodate the more modern Chevy small block with electronic fuel injection. Virtually every piece on this T was fabricated by Charles in his home workshop. For example, he cast his own headlight brackets in a sand-filled wheelbarrow!

By the way, he had to take time out during the roadster build to build his and Lavelle’s new home, which would make any guy desirous of a home with lots of garage space green with envy. It’s a story unto itself. Of course, the hood, louvered side panels and accent strips were all fabricated by Charles. And the cowl vent is fully functional to allow fresh air into the cockpit. Charles wife, Lavelle, was also significantly involved in the build of their 1927 T roadster. Her considerable skills are evident in the beautiful upholstery that not only catches the eye of everyone who sees this T, but also provides comfort for long distance travel in the T. The T’s interior also features a 1934 Ford dash with Charles’ own machined panels for gauges. One of the features that really sets this T apart from the rest is Charles’ custom fabricated top, which adds immeasurably to comfort on those long road trips and features removable side window panels to keep out the cold and moisture when needed. Just as easily, the top can be removed for pleasant open air cruising. I love the chopped Deuce grille shell, which seems like it and the 1927 T roadster body were made for each other when the hood makes the transition. Charles deployed very tasteful use of chrome and polish with the front suspension. A perfect example that it doesn’t have to be all bling to be beautiful. In this view, you’ll note the nice shock brackets Charles machined as well as the chrome side panel accents he fabricated. Speaking of fabrication and machining skills, you’ll note the nice “27 T” hub covers Charles made. Look closer, though, and you’ll be blown away to learn he machined his own lug nuts! The versatility of Charles’ 1927 T roadster is truly amazing. When you realize that now approaching 75 years of knowledge and insight Charles continues to plan and make the various T-Bucket Nationals events from his home base in Texas there could be no better endorsement of how comfortably well made a T roadster it is. In my opinion, if you’re anywhere within half a day’s drive of Carson City, Nevada, you should make every effort to be there for the 2017 T-Bucket Nationals car show on Saturday, June 24, just to feast your eyes on Charles’ awesome 1927 T roadster and have a chance to ask some questions of your own. At the National T-Bucket Alliance business meeting held during its 2015 T-Bucket Nationals in Green Bay, Wisconsin, it was recognized that Charles and Lavelle Tunnell have driven their T roadster to and attended every T-Bucket Nationals since the first one in 1999. In recognition of their devotion to and support of the National T-Bucket Alliance they were inducted into the NTBA’s “T-Bucket Hall of Fame“. Congratulations to a very deserving couple!

(Note: We’re not the organizers of the T-Bucket Nationals; we’re just happy to help promote it. For further information and all event questions please go to the helpful NTBA Event Forum.)