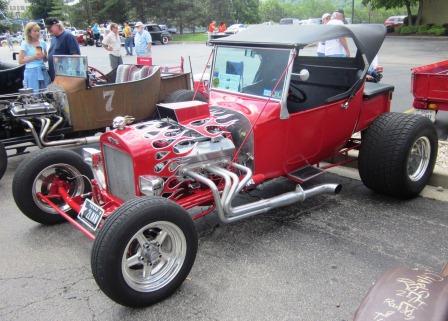 We just published a cool Hooked on T-Bucket Hot Rods Podcast interview with Tim Taylor about how his high miles T-Bucket came about, as well as his involvement in the early days of the NTBA. You can listen to it here at TBucketPodcast.com.

To go along with that interview we’re also republishing this post from 2017 where you can see Tim’s T in more detail. Enjoy.

If you’re still on the fence about attending the T-Bucket Nationals, June 22-24, 2017, in Carson City, Nevada, here’s a nice preview of just one of the cool T-Buckets that will be there. Tim “Toolman” Taylor will be making the trip from Grapevine, Texas. His T-Bucket is always changing and full of nice details. Here’s what it looked like at the T-Bucket Nationals in 2011. Come on out to Carson City to see how it looks today. I remember seeing this Texas T at the first NTBA (then National T-Bucket Association) T-Bucket Nationals I attended in Hannibal, MO back in 2001. Tim Taylor drove it there from Grapevine, Texas and continues to hitch up the trailer and make it to events around the country. What’s really cool is that “Toolman” Tim built this T-Bucket in 1979 and it just keeps getting better with age. Every time I see it, Tim has improved it or added something new to make it more fun, functional or faster. For example, when I saw it at the 2008 T-Bucket Nationals in Springfield, Illinois Tim was getting his newly added electronic fuel injection dialed in. While the interior may look utilitarian, it’s proven to be suitable for long-distance highway cruising: Tim’s earned the NTBA distinction of having completed a 1000 mile cruise in under 30 hours. The dash sports a full complement of gauges, which are absolutely necessary on a T-Bucket that travels as many miles as this one does and is also capable of the performance delivered by its 400 c.i. SBC engine. Let’s just say it walks the walk. In its four decades on the road, this T has probably seen a different front axle per decade, for reasons that run the gamut. As for chrome, who needs it when you’re spending time doing things more fun than polishing. The mono-leaf front spring is a nice touch and you begin to see some of the ingenious workmanship that has gone into this car. The combination mounting of the front spring, radius rods, and shocks is one of those neat, clean things you wonder why it isn’t done more often that way. As noted, this car is in a state of continual refinement and this stylish incorporation of rack and pinion steering (as in the above and the following two pics) is just one more example. Yes, Tim “Toolman” Taylor’s T-Bucket has been around for a long time and maybe because of that people don’t recognize what a real gem of craftsmanship this car is. It’s well worth examining in detail and emulating if you want to build a hot rod that you can spend many enjoyable miles in. Be sure to see it at the 2017 T-Bucket Nationals in Carson City, NV.

We know you’ll want to see more “up close and personal” of this cool T-Bucket, so we have a nice 2 min. 26 sec. video on Tim “Toolman” Taylor’s real “driver” bucket waiting for you.

We look forward to seeing you June 22-24 at the National T-Bucket Alliance‘s 2017 T-Bucket Nationals in Carson City.