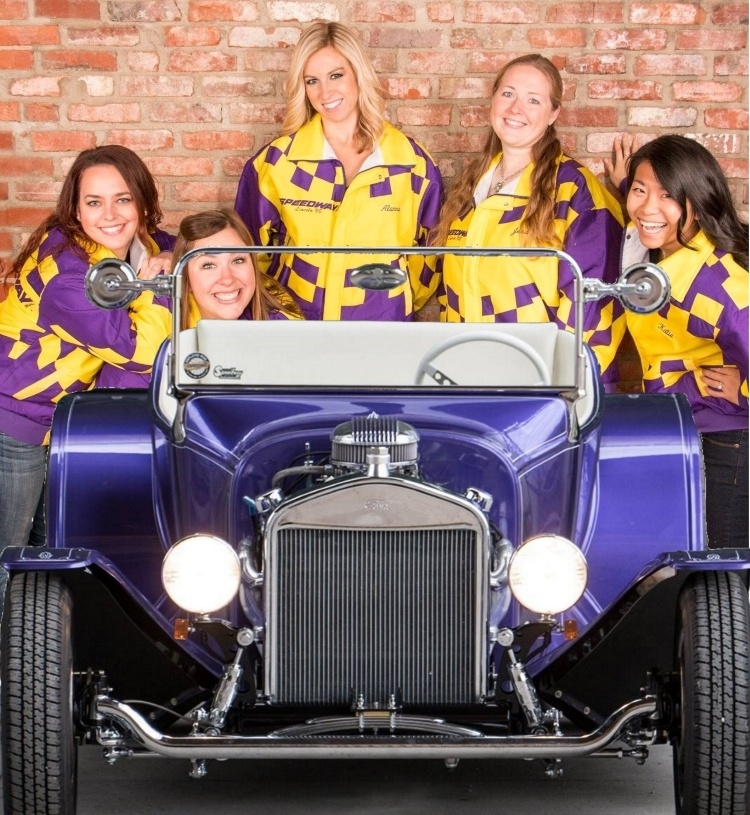 OK, now also look at the T-Bucket. It’s a beauty, too. And while T-Bucket fenders have been a rarity the past half century we can thank these five lovely ladies for helping to bring about a resurgence in full-fendered T-Bucket roadsters. But first, a little background.

T-Bucket fenders really haven’t been a part of the scene since the 1960s. I’m not talking about abbreviated cycle fenders. I mean Model T fenders, running boards and all. If you’re a young guy you may have never seen a full-fendered T-Bucket. But I’m an old guy. My first exposure to great looking T-Bucket fenders came with the magazine coverage of the 1964 America’s Most Beautiful Roadster winning “King T”, built by the late Don Tognotti and living legend Gene Winfield. The full-fendered look was yet another example of the endless variety of T-Bucket build possibilities that exist. Back then it also inspired backyard builders who wanted a different look while also gaining some enhanced practicality for their hot rods, especially in states outside the arid West. One such inspired builder lived in the Great Plains state of Nebraska and the full-fendered T-Bucket he created now resides in the Speedway Motors Museum of American Speed in the capital city of Lincoln. Built by Speedway Motors employee Larry Kruse in the 1960’s it featured a small block Chevy topped off with six deuces and ran sans front brakes with 12-spoke American Racing front mag wheels complemented by large slicks back then extending well beyond coverage of the bobbed rear fenders. But one reason T-Buckets with fenders were few and far between was the fact that over the 40 year span since first produced most Model T fenders had ended up on the scrap pile. In fact, Larry fabricated his own fenders from steel. The reveals following the fender contours were not the result of bead rolling, though. They were built up through the artistic application of Bondo and are completely smooth on the underside. So maybe you were surprised to see T-Bucket fenders featured on the cover of the Summer 2016 Speedway Motors Street Rod Catalog.  In the past, Speedway offered ’26-’27 T fenders as well as some stylized fenders that could be used with a ’23 T-Bucket. But, now they were offering a truly unique complete accessory package that would highlight and add value and practicality to anyone’s channeled Speedway ’23 T-Bucket roadster kit. In the short video below, Betsy outlines the motivations behind their bucket building project.

So, the plan was formalized early in 2016. The team would be made up of five female Speedway employees: one really knows her way around a car and the other four had zero rod building experience. Of course, like any of us would do, they included the phone-a-friend option to get assistance when needed. But to ensure they didn’t divert any of Speedway’s technical support capabilities away from customers they used an outside friend. The ladies’ objective was to complete their full-fendered T-Bucket in time for the June Goodguys “Day at the Hay” event in Speedway Motors’ home of Lincoln, Nebraska. All held down their regular 40 hour a week jobs at Speedway and to make time for the build they would come in early one day a week. Of course, as the deadline approached that expanded to two days a week, with some late nights thrown in. The end result was the finest looking full-fendered T-Bucket I’ve seen in over a decade. And believe me when I say that pictures cannot do it justice because in person it’s incredible. Of course, you’ll likely have a chance to see it at a regional street rod event as part of the Team Speedway booth.

But, the really cool thing is that the Bucket Beauties documented their T-Bucket build, including all the trials and tribulations in their Bucket Beauties Blog, which you’ll find not only very amusing but also equally informative with plenty of under-construction as well as completed T pics. And if the blog isn’t enough you can see and learn even more by checking out their Bucket Beauties YouTube Channel and Facebook Page. To me, it’s great to see something like this fender kit introduced to the T-Bucket market and I’m sure it will open more eyes to the endless T-Bucket build variations that are possible. Speedway’s Bucket Beauties also did a great job showing that building a T-Bucket with style is within just about anyone’s capabilities.