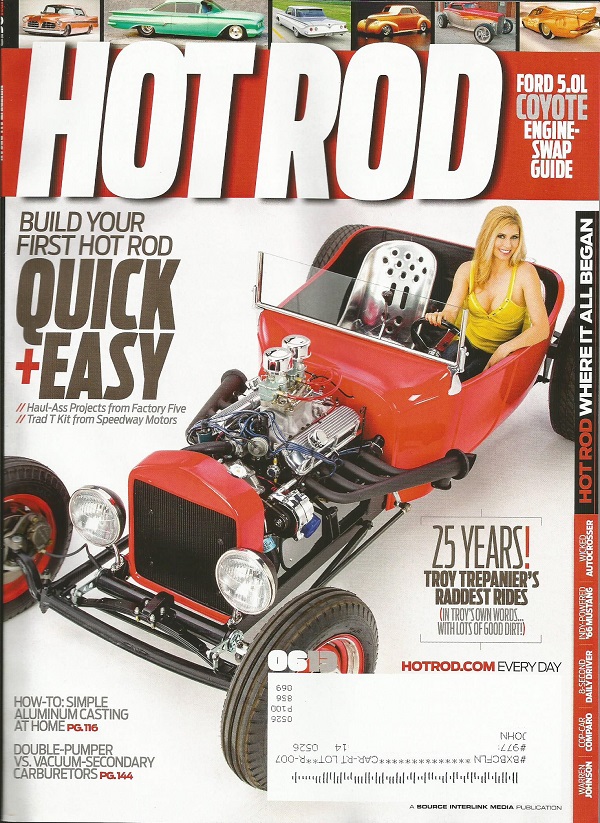 T-Bucket kit car isn’t one of my favorite terms. Too often, it’s used dismissively by those who don’t know what really goes into building a T-Bucket. But, hey, when the leading publication in the field with a circulation of 650,000+ devotes 10 whole pages to building a T-Bucket kit car I’m a huge supporter. So, run — don’t walk — to your nearest news stand and pick up a copy of the June 2013 issue of HOT ROD magazine.

Although I set off a false alarm two years ago about HOT ROD’s T-Bucket project, I’m really happy to see it happen now. You can sense the T-Bucket excitement in the air with a STREET RODDER T-Bucket cover as well as a ROD & CUSTOM T-Bucket project in the works.

It’s interesting to see how the Speedway Motors Tribute T-Bucket kit has evolved since we first covered its introduction. The kit put together by HOT ROD features a different front spring perch design than was shown on the earlier models of the Tribute T. To me, the new design is more traditional looking and reminiscent of the style used on the pioneering U.S. Speed Sport “Instant T” kits of the 1960s.

HOT ROD chose a really cool headline for the cover: Build Your First Hot Rod QUICK + EASY. That pretty much sums up building a T-Bucket in a nutshell. A bit of an oversimplification, but certainly something that works on the news stand and we’re all for that. HOT ROD also did a nice job putting together a costed bill of materials and while the total isn’t cheap they do point out that in several areas they chose style upgrades, compared to basic utility. For example, $799.99 extra for the 9 Super 7 dual carb kit over a stock manifold/carb or $299.99 for the big ’34 Ford commercial headlights instead of the $64.99 standard Dietz 7″ variety. (Coincidentally, we’ve recently completed a costed bill of material for building a T-Bucket on a budget and we’ll cover that in the coming weeks). In any case, you’ll enjoy perusing the HOT ROD bill of materials and making your own mental additions and subtractions. It’s a very informative addition to what is a very well done story on building a T-Bucket kit car today that will no doubt produce many more devoted T-Bucket hot rodders. The more the merrier!

UPDATE: You can view the article on the HOT ROD website here>