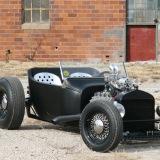 If you enjoyed yesterday’s post on Dan Holck’s low down T-Bucket, you’re going to love this. It makes perfect sense that “America’s Oldest Speed Shop” would expand its extensive T-Bucket kits product line by offering a “Tribute T” reflective of the Model T-based hot rods that were built, driven and raced in the era surrounding the company’s founding in 1952. (A month ago, we did a short post on this new T-Bucket and it drew a lot of interest and attention. In response, we wanted to present some more detail for those who just can’t get enough).

First glances will quickly confirm that this T-Bucket kit is quite different from what has become the conventional T-Bucket style that is more reflective of those built in the 60s and 70s. The new “Tribute T” has a clean, lean and low look that will be readily embraced by T-Bucket builders who admire the traditional hot rod look of the 40s and 50s. How this came about is an interesting story. Speedway Motors has been producing T-Bucket kits since the 1960s and a few years ago they initiated a project to re-engineer their basic offering which we noted in an earlier post. Basically, the Speedway frames have been redesigned to offer “bolt together” assembly, as opposed to before when a bit more fabrication by the builder was necessary. Around that same time period, a group of Speedway employees mocked up a T-Bucket frame with an extra-high rear kickup to produce a low, more traditional looking bucket. As it is with most innovative companies, there were other opportunities of more significance that were competing for resources and time so that engineering project didn’t get any traction. Then, in early 2009 Speedway acquired Total Performance, which was perhaps the leading T-Bucket kit car manufacturer at that time. That acquisition brought about an increased Speedway focus on the T-Bucket market. As a result, after completing the revamp on the company’s basic T-Bucket kit lineup in mid-2009, Speedway’s main R&D guy, Scott Cornish, applied his many years of street rod building experience to a project to develop a totally new, yet more traditional looking T-Bucket based hot rod: one with an extra-low ride height, while still offering maximum ground clearance. After Scott presented his concept, Speedy Bill Smith and his sons liked what they saw and green-lighted the Tribute T project in early 2010. According to Speedway’s Damon Lee, the next step was to build a Tribute T prototype that was unveiled at the 2010 Street Rod Nationals. So, just what’s new and different on the Tribute T? Lots, and we’ll start from the front. The 5 inch dropped I-beam axle is certainly more traditional looking than the more contemporary tube axles and the beautifully tapered and lightened wishbone radius rods complete the look of hot rods past. The tie rod is located behind the axle for a clean look and to ensure proper Ackermann steering geometry. The unobtrusive friction shocks help keep the front end looking simple, clean and functional which is what a T-Bucket is all about. The reversed Corvair steering box is a tried and proven T-Bucket configuration that provides for a pleasing drag link angle. Moving to the rear of the Tribute T, it’s hard to miss the Model A style rear crossmember which supports a medium arch spring. Due to the deep channeling of the body, the integral fiberglass floor with driveshaft tunnel and the shape of the rear crossmember, it’s necessary to use a rear end that does not employ an offset pinion. Likely candidates from the standpoint of both fit and appearance are the early Ford banjo style or Winters quick-change rear end, which Speedway can supply as well. And to match the front suspension, the rear end of the Tribute T prototype is also located by a pair of traditional looking wishbones (although the production rear suspension may vary slightly). According to Speedway’s Damon Lee, first production versions of the Tribute T are planned for release in early 2011 and whether they will employ the lightening holes on the frame kickup used on the prototype will depend to some extent on the expressed interests of potential Tribute T purchasers.

From my perspective, Speedway’s Tribute T looks like a winner by combining a traditional look with today’s street rod engineering capabilities in a package designed to be assembled by anyone.

2 thoughts on “Speedway Motors’ New Tribute T-Bucket: What goes around, comes around”