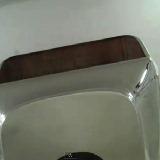 Last year, we posted a video on a Chrome-Crazy T-Bucket that was very popular, but I think the video in this post will easily surpass it in popularity. What’s that — you didn’t think you could chrome plate a resin-based Model T facsimile? Better not tell the guys at Van’s Body & Frame in Colby, Kansas. Since starting up their Chrome It operation in February, they’ve been chroming everything in sight: from mailboxes to that ‘glass bucket we all love.

After looking at the video, you’re probably saying to yourself, “I’ve never seen so many guys shuffling around in a spray booth before.” According to Deric Guy at Van’s, it’s not just because they want to be in on all the fun; it’s because they’re necessary when you’re putting on water, then a sensitizer, then a chrome finish and a tint — and doing it all within a short time-sensitive window without letting your hoses brush against and ruin the finish.

This is a T-Bucket body they just did for a customer who’s hoping to get his bucket assembled in time for hitting the shows this Summer. In this case, they applied a special blue tint to make the chrome finish even more dramatic and we hope to bring you an update on the bucket when it’s ready for its unveiling.

4/7/11 Update: Speaking of that blue tint, here is the final product in the above video. Pretty cool, huh?

Of course, this process can be applied to your suspension components or your frame for some really dramatic results. I know your next question: “What does it cost?” Deric says that although they charge by the square inch that it’s not a great deal more than a quality paint finish. So, if your ready to expose more shiny side(s) on your T-Bucket hot rod, you can reach Van’s at 1-800-279-1064 or on the web at VansBodyAndFrame.net.

1 thought on “How About Chroming Your Fiberglass T-Bucket Body”