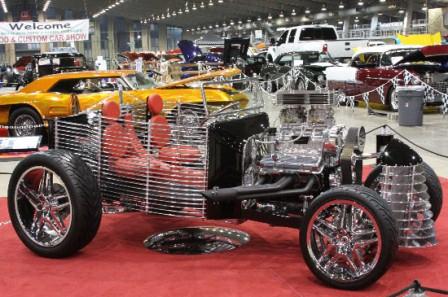 You know what day it is, so the time is right to reveal the “Transparent T” — the bucket you can barely see. I know, you’re probably thinking, “what the …”? But this was actually one of the vaunted “Go for the Gold” winners at Darryl Starbird’s 47th Annual Exotic Car Show in Tulsa this year. It’s hard to imagine that one of the other “Go for the Gold” winners in 2011 was Russ Freund’s beautiful Takeout T. The Transparent T is the creation of New Mexico steel sculpture artist, Doug Weigel, who not only builds feature cars for shows but also creates non-rolling sculpture that is featured in gallery showings. So, back to the title quote, which left our former president a bit tongue-tied. You see, Doug Weigel actually won the $20,000 cash grand prize at last year’s Starbird show with his Tiki T creation. (Steve Scott, if you’re out there, please feel free to weigh in on where the inspiration may have come from). You’d think the Tiki T would be enough, but it spawned today’s Transparent T and we’ll just say, “to each his own”.