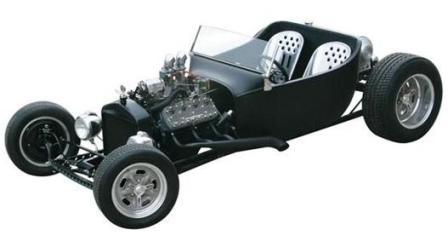 While flipping through the latest issue of Rod & Custom, my eyes were drawn to a very sharp looking low-to-the-ground T-Bucket that was pictured in their coverage of the NSRA 2010 Street Rod Nationals in Louisville. (Here’s a link to that awesome R&C photo.>) It was in the Speedway Motors display and looked nothing like any T-Bucket kit I’d ever seen offered by either Speedway or Total Performance! In addition to the low stance, this bucket had a 5 inch dropped I-beam axle and split wishbones, which is totally different from any T-Bucket kit that’s been offered before. This new kit features an extra high rear kickup to get the low stance and was designed for use with either the old Ford banjo style or quickchange rear axles. And I almost forgot to mention the new Tribute chassis uses the tried and true reversed Corvair steering box with the tie rod nicely positioned behind the axle. Another very nice touch. I must say that I was previously feeling a bit disappointed that Speedway hadn’t seemed to carry over much of the Total Performance product line and seemed to be just sticking to their older kits with a few minor upgrades. However, this new T-Bucket kit has totally changed my mind. (I’m guessing they might have had some third-party inspiration for this design, but that’s for another blog post on another day). For now, head on over to the Speedway Tribute T-Bucket page and check it out. After that, come back and post a comment to let us know what you think.