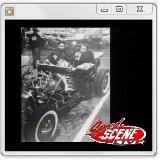 As noted in our earlier post, legendary hot rod and racing announcer Bob Beck has a regular feature on Speed Scene Live. It’s called the Great American Auto Scene (G.A.A.S.) and Bob’s report on the history and significance of T-Buckets begins at about the 27 minute mark of the show. It’s a fun, informative report and you’ll enjoy watching it. Of course, he starts by mentioning the significance of historic T-Buckets like Norm Grabowski’s Kookie Kar. He then discusses other significant early model T-based hot rods like TV Tommy Ivo’s Buick nailhead-powered T-Bucket and discusses their popularity in the 70s and up to today, noting that low-cost fiberglass T-Bucket bodies, which are still readily available, help contribute to their ongoing popularity as dramatic looking hot rods that can be built on a budget. Along the way, TBucketPlans.com was happy to get a little exposure and we thank Bob very much for highlighting the torch we carry to keep the T-Bucket universe alive. So, if you have a few spare minutes and are ready to kick back and listen to a nice report on T-Buckets, give Bob Beck’s report on the 4/26/2011 edition of Speed Scene Live a look ‘n listen.