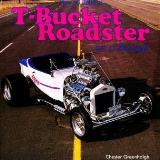 Would you believe that the 1990 paperback version of Chester Greenhalgh‘s legendary “How to Build a T-Bucket” book is being offered for sale in Japan for $489?! First, though, here’s a little background.

The original “How to Build a T-Bucket Roadster for Under $3000” was self-published by Chester in 1986. Twenty-five years ago, self-publishing meant 242 manually typewritten pages (with no spell checker and no automatic error correction), Instamatic black and white photos that had to be screened for offset printing, which was done on conventional 8 1/2″ by 11″ paper, and then spiral bound with separately color-printed cover pages.

Based on Chester’s by-the-bootstraps self-publishing success, in 1990 a trade paperback version titled “How to Build a T-Bucket Roadster on a Budget” appeared in bookstores, published by Motorbooks International. It featured nicely typeset copy and perfect binding, which looks good on your bookshelf but won’t let pages lay flat on your shop table. It was also edited to fit a certain size and page count. It was edited to just 144 pages and contained 70 less photographs than Chester’s original. In the editing, some of Chester’s more “colorful” comments were omitted. I bought my own copy years ago and gladly paid $125 for it because the information just wasn’t available anywhere else.

Which brings us to today, where evidently the going rate for a copy in Japan is $489. I learned about this thanks to the magic of Twitter. (By the way, if you don’t already we recommend you follow TBucketPlans on Twitter. It’s a great way to pick up on cool T-Bucket news tidbits, deals on T-Bucket projects and parts and where else would you learn about the T-Bucket owning $18 million Ponzi schemer who was just sentenced to 10 years in prison). So I follow the link in the Tweet I saw about Chester’s book and it leads to the Japanese version of Amazon.com, which shows two copies available at prices starting at 39,890 Yen — which certainly looks like a lot of dough.

Just to be sure, though, I plugged the numbers into the handy Google currency calculator and sure enough copies of Chester’s book are being offered in Japan today for $489. And, of course, you might say “that’s Japan where most everything American goes for an inflated price”. And you’d be kind of correct, because used copies on the U.S. version of Amazon.com are selling for $195! Now, isn’t it great knowing that what others are willing to pay hundreds of dollars for you can get even better for only $18.95? So, if you haven’t purchased your own copy yet what are you waiting for? After all, the just released: Digitally Remastered, Revised 25th Anniversary Edition features 258 pages, 400+ photos, templates, diagrams and illustrations to show every detail of “How to Build a T-Bucket Hot Rod Roadster for Under $3000: kickin’ it old skool”. Click here to learn more, or if you’re ready to make your best $14.99 investment yet …