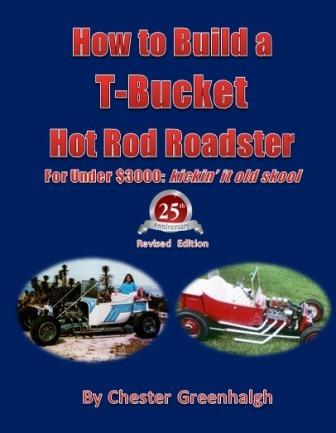 Here’s a copy of the News Release we just issued:

“How to Build a T-Bucket Hot Rod Roadster for Under $3000:
kickin’ it old skool“ SOMEWHERE IN MEXICO – May 10, 2011 – With copies of the out-of-print paperback selling for $489 in Japan, the 25th Anniversary revised eBook edition of “How to Build a T-Bucket Hot Rod Roadster for Under $3000: kickin it old skool” features 70 more photos and illustrations and over 100 additional pages for less than the cost of four gallons of gasoline.

Written and originally self-published in 1986 by professional T-Bucket and hot rod builder Chester Greenhalgh, “How to Build a T-Bucket Roadster for Under $3000” was the first and only book of its kind to lay out in specific detail every element of building, not just buying and assembling, a hot rod. It meticulously documented the process with over 400 photos, templates, diagrams and illustrations. The 242 page book was written to enable the average person to build a T-Bucket roadster in a home garage on a beer budget.

Chester’s first self-published print run sold out and the edited and slimmed down trade paperback version titled “How to Build a T-Bucket Roadster on a Budget” went out of print in the 1990s. Over the years, both versions have sold through booksellers and online auction sites for $100-$200 and often much more as in the $489 in Japan example.

The demand for this classic is driven not only by its comprehensive approach but also the innovative, low-cost construction techniques it details, many of which can be used in building hot rods other than T-Buckets, as in the following examples:

After locating the long-retired Chester Greenhalgh in a remote Mexican village, 18 months ago the officially authorized eBook version of “How to Build a T-Bucket Roadster for Under $3000” was released by TBucketPlans.com. To celebrate the 25th Anniversary of its first publication, Chester Greenhalgh and TBucketPlans.com are now proud to introduce the digitally remastered, revised version,  “How to Build a T-Bucket Hot Rod Roadster for Under $3000: kickin’ it old skool”.

In the new, revised version dimensions have been added to drawings and templates, text and drawings feature color highlights for greater clarity, photo resolution has been dramatically improved, many beneficial edits and updates have been made and every page now offers clean, sharp viewing and printing.

The detailed Table of Contents and other information about the $14.99 eBook in PDF format can be found at www.TBucketPlans.com or you may choose to download it now: