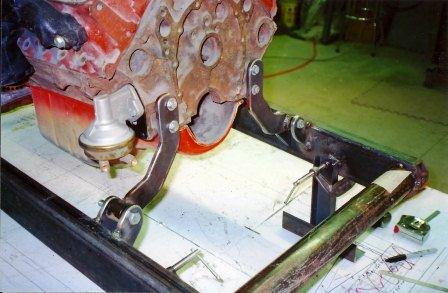 Most small block Chevy motor mounts you’ll see are designed for side mounting. If you’re looking for something different, better looking and easy to build, this is your lucky day because we cover it in the tenth installment in our series documenting how Bob Hamilton, who created the incredibly informative and popular StreetRod 101 DVD Series builds a 1927 T roadster using only a modest budget and loads of experience.

You’ll recall that Bob started with a fiberglass body that had been carved up for drag racing purposes. He filled in a previously cut out section of the rear deck, installed a floor, began building a tapered frame that follows the 1927 T’s body contours and constructed the front and rear crossmembers, rear suspension and panhard bar, positioned the engine, mounted a vintage Mustang steering box and constructed the transmission crossmember. Follow along today as Bob shows you how to build small block Chevy motor mounts and begins to position the front axle.

“After I played around with putting side small block Chevy motor mounts on the engine, I decided that the mounts looked too big and out of proportion. So as sometimes happens, I went to plan B. Plan B is to use front motor mounts instead. When using front small block Chevy motor mounts, one thing to consider is whether a mechanical or an electrical fuel pump will be used. I’ve done both in the past but prefer the mechanical. Here is where the ram horn exhaust manifolds come in real handy. I supported and shimmed the engine and then removed the angle iron on the front.

Whenever I make patterns, I use chipboard that is purchased from an upholstery supply store. It is thicker than poster board and is still easy to cut and makes great patterns. Notice how the mount comes down far enough to clear the mechanical fuel pump.” “This is a stand off shot to check whether I like the way it sits with the new mount pattern in place. If I decided that the engine was too high, then I could lower the engine and transmission. The thing to remember here is twofold: with the engine lowered, the transmission is lowered also – this throws off the pinion angle some, maybe not enough to worry about, but definitely something to consider. Second, the lower the engine, the lower the air cleaner will sit in relationship to the top of the cowl. I like this set up, so will run with it.” “These small block Chevy motor mounts are made from 3/8 ths inch plate and are the same on each side.” “The tubing for the urethane bushings (1 1/8th) is cut and added to the brackets and welded in place.” “Patterns are made for the side frame mounts out of ¼ inch, mounted to the motor mount brackets, centered, and then tacked in place.”

How to Position Front Axle “Here is a shot with all the blocks, shims, and jack removed. I think it looks great. Now on to the front axle. Notice how I support the front axle with the homemade stands. This will help me to set the caster that I use (4-6 degrees).” “This picture shows what the axle looks like with a digital protractor mocked up in the frame and set to 4 degrees. For those who are really sharp, you will notice that this front end is from a different car. But that is ok. They are all set up the same, so it really doesn’t matter.” We hope you enjoyed this installment. It’s fascinating to actually watch Bob build a frame like this and his 4-1/2 hour StreetRod 101: Hot Rod Frame & Chassis DVD covers it in great detail. Hopefully, you’ve already been inspired to purchase the entire StreetRod 101 DVD Library and have already begun benefiting from Bob’s world of helpful advice. But, if you haven’t we highly recommend you click on the DVD image below and check them out.