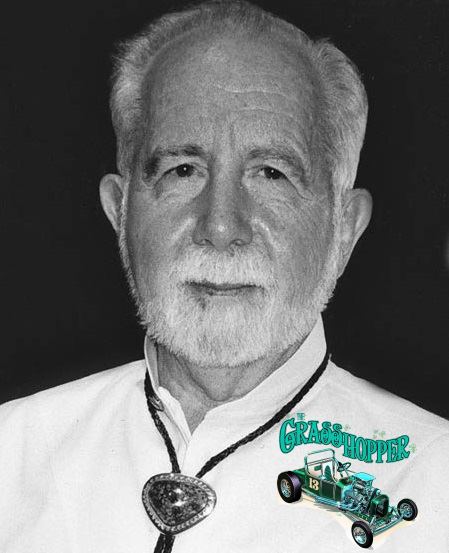 It was sad to read in yesterday’s LA Times that “John J. Geraghty, an automotive engineer who made his mark in hot rod design (John Geraghty Automotive) before switching gears and becoming an expert in the art of the American West, has died. He was 85.” His obituary noted, “a native of California, Geraghty was married for 60 years to his wife Saralynn, who passed in 2013. Geraghty retired in 1997 after heading John Geraghty Automotive Inc., Geraghty A+M Products Inc., and Geraghty MPG Products, specializing in national automotive businesses with headquarters in Los Angeles, for 44 years.”

Just last month, we’d done a story about the legendary John Geraghty Automotive ’23 T roadster, Grasshopper, that was featured on the cover of Hot Rod magazine in 1959. Not only was I incredibly impressed by it as a youngster, but was blown away to see it’s beautiful re-creation at this year’s Grand National Roadster Show.

Based on the beauty of that car which was designed and built at his John Geraghty Automotive it’s maybe not too surprising to learn that John Geraghty was a multifaceted talent who left a real legacy not only in the automotive world, but perhaps most significantly in the art world.

John Geraghty’s beginnings were humble, having been born in Los Angeles in 1930, he was raised by his grandmother and attended Fresno State before joining the Navy and being assigned to the USS Toledo, where he became a welterweight boxing champ.

An early mechanical whiz, one of John Geraghty’s first hot rods set a Bonneville speed record of 230 mph, when he was only 22 years old.

In 1960, the Christmas display he built at his home in the L.A.-area community of Montrose made headlines. It included a 40-foot-tall rocket — the Saintnik I — that he put together from welded oil drums and old car parts. A tape recording blared Christmas carols, alternating with the launch pad roar of an actual Atlas rocket.

At John Geraghty Automotive he was frequently called upon by Hot Rod magazine as a source for various articles. John Geraghty was an early adopter of dyno tuning for improving engine efficiency and his shop and its tuning skills were frequently sought out by hot rodders with a need for speed.

For example, when Ed Davis originally bought his 1958 Corvette, he wanted to go sports car racing. After going to John Geraghty Automotive for tuning, the Corvette broke and held track records at both Santa Barbara and Riverside road race courses. After Davis’ interest turned to drag racing, John Geraghty turned it into “the world’s fastest stock-bodied Corvette” as noted in the July 1961 issue of Car Craft magazine.

Also at John Geraghty Automotive, he worked on Steve McQueen’s car in the 1968 film “Bullitt” and tuned cars for the FBI. In 1983 he co-wrote the 359-page book, Trailer Life’s Rx for Rv Performance and Mileage. He also designed a system for getting better gas mileage out of RVs, and wrote engine-saving tips in a column for “Trailer Life” magazine.

John Geraghty started collecting art on a trip to Arizona in the 1970s but devoted himself full time to it when he retired from his automotive businesses in 1997.

Geraghty co-founded the National Museum of Wildlife Art in Jackson Hole, Wyoming, and the Cowboy Artists of America Museum in Kerrville, Texas. The latter is now called the Museum of Western Art.  He also profiled artists for Western Art Collector magazine

“The sadness I feel in the loss of my longtime friend John Geraghty is without measure,” said Jackie Autry, Founding Chair of the Autry’s Board of Trustees. “In addition to his role as a major trustee of the Autry, John co-founded the Masters exhibition with Joanne Hale. He was a mentor to Western artists, and many felt he was like a second father.”

The recreated version of the John Geraghty Grasshopper will be on hand at his funeral today at Forest Lawn-Hollywood Hills.