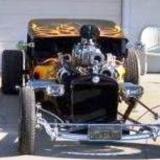 After becoming enamored with Pip Biddlecomb’s “Low Blow” T-Bucket, I subsequently learned that Pip’s bucket was undoubtedly inspired by one built a decade earlier in California. How I learned that is another story that will be covered soon. For now, though, feast your eye’s on the original “Low Blow” T-Bucket built by Scott Ellis of Fresno, CA in the 1970s. This mind-blowing bucket was first unleashed on the hot rod world on the cover of the November, 1977, issue of Hot Rod magazine. However, if you were to have bought that issue of Hot Rod to see more of this hemi-powered bucket, you would have been somewhat disappointed because it only appeared in two pictures (one just a closeup of the blown hemi) in the magazine, both as part of coverage of the 1977 National Street Rod Association (NSRA) Street Rod and Street Machine Nationals held in St. Paul, MN. I should mention that the late 70s were a strange era in hot rod history, with earthtone painted and crushed velvet upholstered “resto-rods” on the pre ’48 end of the scale and funny car inspired, hideous graphics “street freaks” dominating the late models end of things. With its blown hemi, wild flames and mean and low stance, Scott Ellis’ Low Blow T-Bucket stood out like crazy — in a crazy, good way! Fortunately, the late Gray Baskerville was so impressed by Scott’s bad boy Low Blow T-Bucket that after returning to southern California he trecked up to Fresno for what was liberally titled a “rod test” that appeared in the February, 1978 issue of Hot Rod. Only then do you learn that the fiberglass T body was widened 8 inches in order to squeeze in needed foot room after allowing for the big Chrysler Torqueflite transmission sharing space with the two lucky passengers. While Gray described the windshield as being no more than 6 inches tall, it looks more like 9 inches to me, but still presents a sinister look when the hinged-at-the-rear fiberglass flip top is closed after stepping into this “knee high” T. Scott’s 426 hemi is no poseur. It was built by Art Whipple, who owned and tuned the famed “Revellution” Top Fuel Funny Car, driven by Ed “The Ace” McCulloch. Together, the famed Whipple & McCulloch AA/FC team won the 1970 NHRA US Nationals and NHRA 1971 Winter Nationals. Art continued his big, blown horsepower making ways by founding Whipple Superchargers. The 426 hemi itself was of 1966 vintage and Art Whipple built it with an Engle cam and Weiand blower manifold and drive, and it claimed a respectable 8-10 mpg back in ’78 when gasoline averaged 69 cents a gallon. To give you an idea of how correctly named Scott’s Low Blow T-Bucket is, take a look at these comparison shots with the “Perfect” T-Bucket of fellow Fresnian, Skip. With an overall height of 45 inches, the lowness of Scott’s T is evident here, as is its widened body and dropped Model A front axle with Hurst/Airheart disc brakes. Scott’s T is not only low, but in order to better control all that hemi horsepower also long, with a 118 inch wheelbase and overall car length of 143 inches. Low Blow’s chassis was constructed by Scott in his garage from 2×3 0.120 wall mild steel tubing that was specially contoured to the widened T body. The rear end is an Olds of 1972 vintage suspended by Olds station wagon coil springs.

Tru-Spoke wire wheels are used front and rear with skinny Pirelli front tires and giant Goodrich’s on the rear. Construction of Low Blow took Scott some 8 months with an expenditure of some $15,000, the bulk of which would have gone into the beautiful brutish hemi engine. As for the Hot Rod magazine “rod test” about all it covered was the fact that at 80 mph in Scott’s 2450 pound bucket, the hemi was just loafing and that a simple press of the throttle would break the tires loose at just about any speed. With such a distinctive profile, it’s no wonder that Pip Biddlecombe was inspired to produce his own version of this highly successful formula developed by Scott Ellis.

It’s my understanding that Scott still owns Low Blow which, in my opinion, is one of the legendary T-Buckets.

Wherever this car went, and no matter what kind of other machinery it may have been surrounded by it has a huge impact on everyone that saw it. Take a look at the little kid below covering his mouth as if he’d just exclaimed, “Oh, my …!” Even the most jaded of observers were left slack-jawed in admiration. I’ve subsequently been in contact with Scott and hope to do a nice follow up story when I have a chance to personally connect with him.

3/20/2011 Update: Because I truly can’t get enough of this fabulous T, I wanted to add a few more pics. Although they’re on the grainy side, they do offer some interesting different perspectives. Enjoy. 2/21/18 Update: Thanks to hot rod photographer Sherm Porter, here’s some evidence that Scott Ellis was enjoying Low Blow last year. 40 years since it was first built and it looks every bit as awesomely dramatic today! 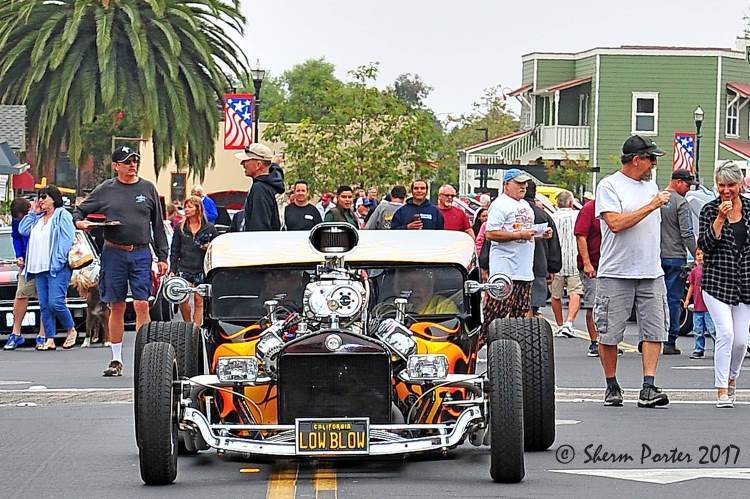