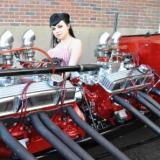 If you’re a regular follower of our blog here at TBucketPlans.com, you know that I don’t normally post or Tweet about T-Buckets for sale on eBay or other auction sites — unless, they’re particularly unique and deserving of further attention. I think this tasty twin-engine T-Bucket for sale on eBay deserves some more exposure because of its many cool build details. Besides, our recent post on Gordon Tronson’s “Double Trouble” T-Bucket created a lot of interest, so I’ll assume I’m not the only one fascinated by the idea of a street-driven T-Bucket with the power and visual impact of two engines. From all indications, this is a brand new build with very few miles (either 60 or 950, depending on which part of the listing you read) that was built to be street driven and which also has all the nicely finished details to make it a show winner. The fact that it’s built to reflect a “traditional” style T-Bucket is a nice bonus. The twin 350 cubic inch Chevy small block engines have had the casting marks ground off so they present that pretty show quality finish. And, if you’re inclined to want to save some bucks after buying this bucket, you can shut down the front engine to get 140 miles of cruising from the 11 gallon tank. That’s a nice 12.7 MPG. The interior upholstery is Zodiak red metalflake vinyl with black vinyl accents, seat belts and carpet. To keep an eye on the engines, it features Dolphin black classic gauges reading Oil & Temp for each mill and an electronic speedometer. I like the fact that this was built as a bobtail T, in the spirit of Marty Hollmann’s hugely influential T-Bucket. The bobtail look really accentuates the long wheelbase necessitated by the two engines. Of course, this wasn’t built to be a drag racer, so the Ford 7.5 rear end is plenty adequate for smoking those traditional looking pie crust cheater slicks. The rear axle is suspended by coilover shocks and from the rear you’ll notice the nice, traditional Model A tail lights. The T grille shell conceals the 750 horsepower rated aluminum radiator and electric fan that take care of cooling both engines. With a starting bid of $18,950, there are no bids so far and only two days left on the auction so if you’ve got the long green and an urge for a really unique and distinctive T-Bucket you better hurry. For the truly skeptical, yes, it really runs and drives, at least out in back of the shopping center. Just take a look at the video.

If and when it does sell, if you have any details please let us know because we’d love to post something from the new owner after he’s had a chance to put some street miles on this novel T-Bucket.

Update 1/15/11: Well, the auction closed with no sale and zero bids. Guess that’ll happen with such a high starting bid. Will be interesting to see where this T-Bucket eventually ends up.