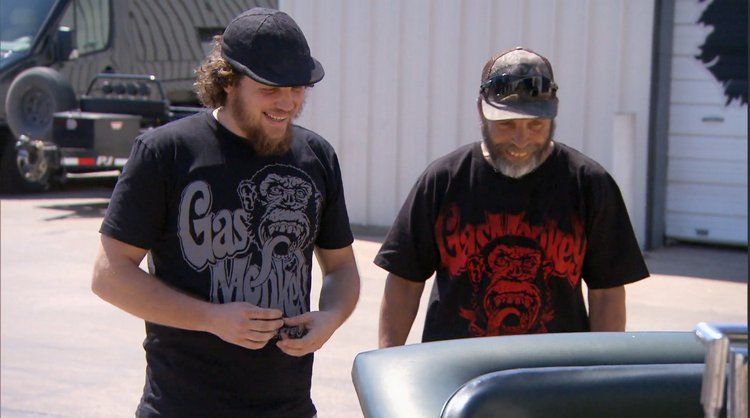 After watching last week’s episode about the Fast n’ Loud T-Bucket, I just had to tune in this week to see if it was sold at a huge premium after adding a few hundred dollars worth of parts along with a tuneup. I’ll cut to the chase. Instead, the Gas Monkey T-Bucket sold at a big loss. But that doesn’t tell the whole story. You’ll recall from last week’s post, that Richard paid $9500 for this T-Bucket that was built in the late 1960s. Aside from its peculiar raked stance, which I happen to like, it had loads of chrome plating and other unique features of the era which should make it desirable. For a complete rundown on the Gas Monkey T-Bucket features click here. By Richard Rawlings’ calculation, he had $11,500 invested in the T-Bucket. That’s $9500 purchase price, plus $1000 shipping from California to Texas and another $1000 for parts and labor. He was asking $15,000 and hadn’t gotten much interest in the Gas Monkey T-Bucket. But then the ideal prospective buyers showed up, offered $7000 and Richard gladly accepted the $4500 loss saying, “I’m in the business of selling, not holding.” Well, not for long doing business that way but there’s more to the story. You have to remember that Discovery Channel’s Fast n’ Loud is a “reality television” show. Hate to say it, but the Gas Monkey Garage crew is in the same boat as the Kardashians, Real Housewives and Honey Boo Boo. So when a  seemingly confused Texas “smoke shop” owner named John shows up with his mechanic and the pair gets each other’s names mixed up there was no way the Fast n’ Loud producers were going to let them just walk away. Let’s put the economics of reality television into perspective. E! Online reports that a 30-minute reality show costs approximately $100,000-$500,000 per episode, which is a fraction the cost of a scripted comedy or drama that costs $1 million and up per episode. Charlie Sheen, for example, was earning $860,000 per episode on his hit show, “Two and a Half Men,” in 2009. That’s just for one cast member alone. John, the head shop owners’, negotiating skills seem to be pretty much limited to saying, “I’ve got $7000 cash in my pocket.” You can be assured that somehow the production budget makes Richard whole. On the other hand, the 2+ million Fast n’ Loud viewers have a diminished value of T-Bucket hot rods as a result. Oh, well. You know what they say, “There’s no such thing as bad publicity”. The point being, that a year from now nobody will remember the details of the bad T-Bucket transaction. But a couple million people will have been exposed to T-Buckets and, hopefully, a significant percentage will remember them as the cool cars they are. Anyway, the T-Bucket now resides at A Perfect Peace in Waxahachie, Texas and I’m betting when John’s ready to sell it he’ll double his money.

UPDATE (11/14/16): Evidently the sale at a loss on this T-Bucket didn’t sour Richard Rawlings and the Gas Monkey crew on T-Buckets, because I just learned he was the purchaser of the America’s Most Beautiful Roadster winning Tognotti King T!