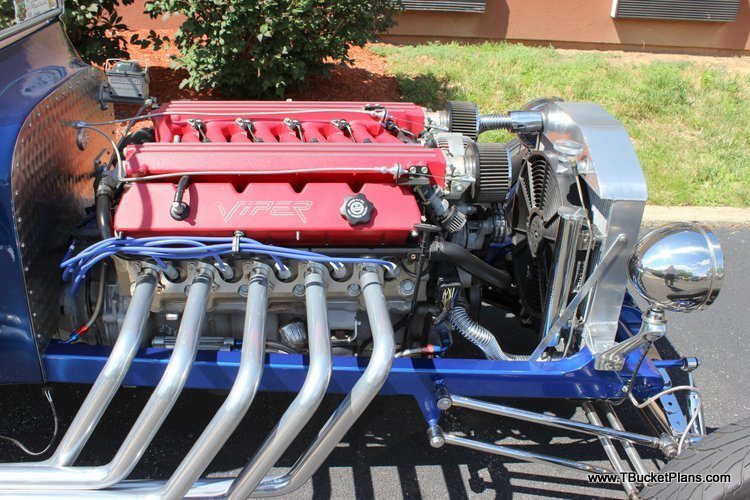 When you attend the 2017 T-Bucket Nationals, June 22-24 in scenic Carson City, Nevada Chris Ward’s T-Bucket powered by 488 cubic inches of Dodge Viper V-10 is but one example of some of the totally awesome and unique T-Bucket hot rods on display.

Seeing Chris Ward‘s Dodge Viper T-Bucket up close and personal at the 2016 T-Bucket Nationals in Indianapolis made the event even more special for me than it already was. Although I had seen a couple pics on the Internet and also the feature on it in Street Rodder back in 2012, it truly is something you have to see for yourself to fully appreciate.

Yes, it looks longer than your average T-Bucket. And for good reason. The Dodge Viper engine has an overall length of 39 inches, compared to just a bit over 28 inches for a small block Chevy. Plus, for more comfort, Chris chose a stretched T-Bucket body that’s about 5 inches longer than standard. The extra length also helps in terms of the Viper 6-speed manual transmission which has a rather long tailshaft To accommodate the engine and body, Chris’ Dodge Viper T-Bucket chassis was designed for a 118 inch wheelbase. For comparison, a typical T-Bucket might have a wheelbase around 102 inches. While the Dodge Viper sports car has a wheelbase of only 96 inches, that’s because the midpoint of the engine almost reaches the front spindle line, which is fine with fenders and an extended nose. But a T-Bucket, on the other hand, must have its engine set back nicely behind the front axle or it would just look strange. Although the Viper V-10 engine is a massive 488 cubic inches and pumps out something like 450 horsepower, that comes with only a minimal weight addition. I had learned from the late Brock Yates‘ book about the Duffy Livingstone Eliminator hot rod that the Dodge Viper V-10 was only 60 pounds heavier than the small block Chevy because the Lamborghini designed engine’s block and heads were cast in aluminum. For anyone coming up behind it, there’s no mistaking what they’re about to encounter. Chris being a big Mopar fan, the Viper theme is beautifully carried out wherever you look on this fine T-Bucket. For example, the interior, as well as the pickup bed cover, features snakeskin-look upholstery, which is carried through to the rim of the steering wheel. But, I’ll give it a try anyway. In person, it’s incredible.

While Chris Ward’s Dodge Viper T-Bucket is a treat for the eyes, it’s also a symphony for the ears! Chris offered me a ride and without hesitation I was enjoying one of my most incredible T-Bucket experiences yet. You can get a feel for it through the short video below. Although it’s shaky and suffers from wind noise going down the road, I think you’ll still get an appreciation for just how powerful, yet smooth, the V-10 sounds going through the custom headers. And seeing over that beautiful expanse of Viper engine is something else.

Next time, I promise I’ll bring along a camera with image stabilization and a microphone windscreen! 😉 Weighing one-third less than a Dodge Viper, the performance potential of this Dodge Viper T-Bucket is truly mind-boggling! Chris Ward has quite a few great-looking T-Bucket builds under his belt and this one is an absolute standout. And for Chris to make the trip from Arizona to Indy for the 2016 T-Bucket Nationals it shows why these are becoming can’t-miss events. You probably know by now that I’m a huge fan of T-Bucket creativity. In my book, Chris Ward’s Dodge Viper T-Bucket is what it’s all about.