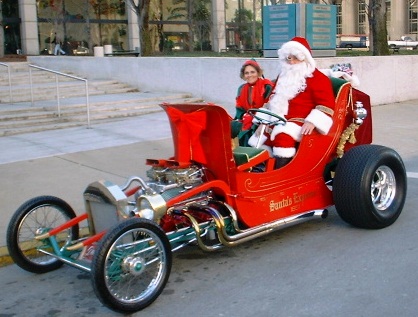 Hot Rod Santa faced global population explosion and the escalating costs of reindeer food so he turned to Chester Greenhalgh-like T-Bucket hot rod ingenuity for a better way to serve his billions of little customers. This 400+ horse open sleigh was built by Russian artisans using only the highest quality Canadian Maple for the body. With a dual-quad, tunnel ram-fed small block Chevy for power this T-Bucket sleigh was designed to leave Rudolph and his eight friends behind in the snowflakes. And, Santa’s Express features such standard T-Bucket features as carriage lamps (but, of course), a matching metalflake steering wheel and chromed differential cover. The plush interior is in keeping with T-Bucket hot rods past, like Marty Hollmann’s. In actuality, this Hot Rod Santa sleigh was built by Butch and Tina Reeves in a span of just over two weeks before Christmas back in 2002. They used it around St. Louis for charity events to make children happy like the ones at Ronald McDonald House. According to Butch, “It was thrown together out of a lot used parts. We loved building it and we still love the car.” It was sold on eBay in October, 2010, for $12,000 — a bargain if you not only enjoy leading the annual Christmas parade, but also bringing joy to the heart of every youngster who sees it.

4 thoughts on “Hot Rod Santa and His T-Bucket Sleigh”