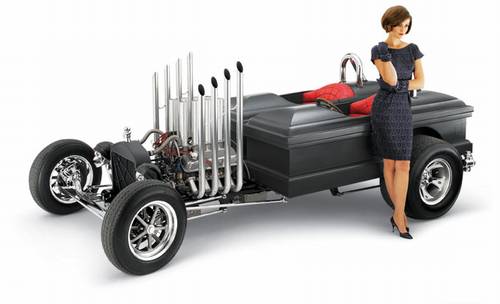 In 1966, I was fascinated by way-out show cars like Steve Scott’s “Uncertain-T”, so when the “Hot Rod Herman” episode of The Munsters appeared with Grandpa’s Drag-U-La, built to win back the family Munster Coach, I was glued to that blurry Black & White television!

Just in case you’re too young to know or too old to remember take a look at this brief video highlight.

The Drag-U-La was created by legendary designer Tom Daniel to be built by Barris Kustom and its influence was more widespread and longer lasting than anyone could have imagined at the time. Not only did it inspire a multitude of clones that were created for both recreational and commercial purposes, but it also inspired scores of other coffin cars. I became aware of just how great the Drag-U-La influence was when several years ago while picking up an old Ford Y-Block in a remote part of Southwest Missouri that I spied a ragged coffin car parked in the side yard of a farmhouse.

I can understand the widespread popularity of coffin cars. Most are built on a narrowed version of a typical T-Bucket chassis and the only real challenge is where to find a donor casket by legitimate means. The variety of Drag-U-La inspired coffin cars is mind-boggling. While some are built on a T-Bucket chassis, others use a VW pan or anything else readily available such as a golf cart. Motivation runs the gamut from a simple electric motor to mild small blocks to full-on blown and injected or nitrous boosted big blocks,and even all the way to being jet engine powered. And, yes, they’re capable of being driven. Enjoy this video of Dragonman’s coffin car in Colorado Springs, CO.

So, with Halloween approaching it’s only appropriate to bask in the glory of the many coffin cars inspired by Grandpa Munster’s Drag-U-La. Enjoy this growing gallery of photos and if you’re a coffin rodder whose ride has been left out, send us some pics and we’ll be sure to add them.

Click on any Gallery pic to enlarge and scroll through the Gallery.

And, if you still can’t get enough Drag-U-La here’s a longer clip from the Munsters.

If you’ve enjoyed this Halloween season feature, please be sure to share with your friends. Thanks.