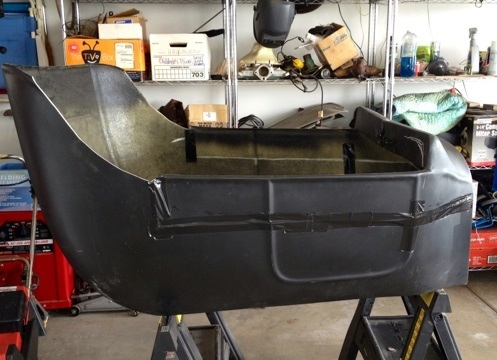 I hate to say it, but I’ve had an old T-Bucket body taking up space in my garage for years because I was afraid to move ahead with a plan I’ve had. My plan is to build a sectioned T-Bucket incorporating numerous elements of significant T-Buckets that have inspired me by their uniqueness over the years. The first of those was built in the early 60s by San Antonio, Texas hot rodder, Kit Carlisle. It was featured in both Hot Rod and Car Craft (and more recently, a nice couple of pics appeared in The Rodders Journal). What I love most about it is the stance. The second major influence was a radical T-Bucket built in the mid-60s by Chicago hot rodder, Don Kendall. It was featured in Rod & Custom. While I’m in love with its low stance and bobtail T look, it’s Don’s truly unique interior design that’s kept me fascinated all these years. I had a chance to meet Don recently and will cover that and Don’s other truly innovative T-Bucket in another post in the near future, but here’s a brief look at what was capturing people’s attention at shows back then. The third truly legendary T-Bucket, which is the one driving the major changes to my T-Bucket body, is the radical “Leg Show” built by Californian Dan Eichstedt. It debuted at the 1970 Oakland Roadster Show and later captured the hot rod world’s attention on the cover of the January, 1971 Rod & Custom. I’m crazy about every aspect of Dan’s truly unique T, but what captures your immediate attention is the radically altered body that helped give it those cartoon-like proportions that left an indelible impression with everyone who saw it. You’ll note from the photo above that the body of Dan’s T has undergone some rather major surgery to become a sectioned T-Bucket and I wanted to do something similar with my T build, using the old MAS body I kept bumping into in the garage. So, about 18 months ago I took a piece of chalk and marked off how I might go about sectioning or otherwise chopping this T-Bucket body. After all, when you buy the cheapest body out there you might as well take some time to give it some personality.

But, after chalking it I stalled. I couldn’t bring myself to get out the jigsaw and start chopping it. Why? Because I was afraid of not being able to get it put back together and worried it might look like a mess or fall apart after its first pothole encounter. Then, I saw the light.

As you know, I’ve been working with Bob Hamilton to market his fabulous StreetRod 101: Hot Rod Frame & Chassis Construction DVDs at my other website, www.StreetRodPlans.com. It’s gotten very enthusiastic response from everyone who’s bought it. And that leads us to my awakening — and chopping.

Beyond the initial tremendously informative 4-1/2 hour DVD, Bob compiled a true instructional video library on just about every aspect of street rod and hot rod home-building. One of the first of those new DVD sets is an incredible 5-hour, 3-DVD set titled, “Fiberglass Body Modifications“. After watching that, I had the complete confidence to go out to the garage, put on my face shield, and fire up my jigsaw! So, this is what a sectioned T-Bucket body by 5 inches looks like (at least temporarily held in place with duct tape). It’s now looking a bit more distinctive, somewhat like the 1915-style bodies popularized by Dan Woods and CCR and has begun to take on the proportions more to my liking as in Dan’s “Leg Show”. I didn’t chop it as much as Dan did because my aim wasn’t to copy, but rather, to be inspired by his work. With all that confidence, I moved to the firewall and narrowed it by 4 inches. I know, there are plenty of guys who complain about not enough room in a T-Bucket. I’m reminded of a great Jay Leno response when he was offered a Diet Coke: “Diet Coke? Give me a real Coke — with extra sugar!” I gained so much knowledge and confidence from Bob Hamilton’s 5-hour, 3-DVD set titled, “Fiberglass Body Modifications“ that I not only fabricated a sectioned T-Bucket body, but I also decided to extend the cowl (more about that another day). Get yours and you can do it, too.