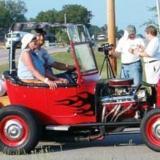 When we started our T-Bucket Trip Ups series, the intention was to make you aware of things you may want to avoid doing in your T-Bucket build if you want to eliminate frustration and have a pleasing looking bucket at the same time. It’s not too hard to guess what our point is in this installment: you want to sit in, not on your T-Bucket.

For example, the guys in the above bucket have their knees half way up the height of the windshield which, rather obviously, is about a foot short of being able to shield their faces from the oncoming bug onslaught once they hit the highway. Judging from the relative proportions in this photo, I’d guess this T-Bucket has a seat riser that’s almost a foot high! By contrast, when Ray Sisemore documented his T-Bucket build in the mid 60s, his seat riser was 7 inches (tapering to 6 inches at the back). Chester Greenhalgh illustrates the construction of a seat riser only 4 inches high, using a common 2×4 in his legendary “How to Build a T-Bucket Roadster for Under $3000”. You’re not storing anything other than wiring and possibly some tools under the seat so it just isn’t necessary to have a tall seat riser. Besides, you don’t want to have your passenger plop out when you hit a pothole! You’ll note that in the case of the couple above they’ve constructed their own “windshield extension” to provide protection. So, this is a pretty simple T-Bucket Trip Up: you don’t want your seat riser so high that your body extends outside the T-Bucket body shell and the windshield is below your face.