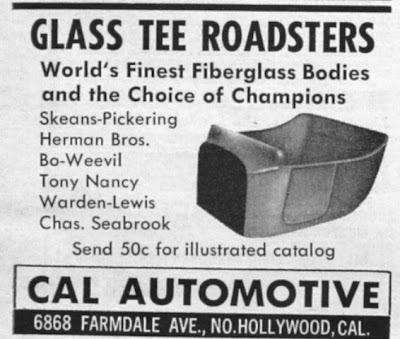 We know from The Real History of the Fiberglass T-Bucket Body that ‘glass Model T bodies were first introduced in 1957 by the Diablo Speed Shop. But, that fledgling venture only produced a couple of bodies, one of which was sold to Buzz Pitzen who built The World’s First Fiberglass T-Bucket Hot Rod.

However, the company that really got the T-Bucket “fad” going was Cal Automotive, which got its start in 1960 and quickly became the leading hot rod fiberglass company in the country. The story of Cal Automotive is very much the story of hot rodding in the 60s, “a magic time”. The founders of Cal Automotive were two Navy buddies, Curt Hamilton and Bud Lang, who were serving at bases in Washington state where they had started a car club dubbed the Alky-Haulers as a snub to the local conservative Dutch community. It was Bud who suggested they start a fiberglass company when their tours of duty were over. At the time, neither Bud nor Curt had any experience with fiberglass but it seemed like an interesting material that might offer an opportunity in the hot rod market. The only person really doing any hot rod fiberglass work then was Dee Wescott in Boring, Oregon, but he was only doing fenders. According to Bud Lang, “many custom cars in the mid- to late-50s featured small scoops on the front corners of their roof lines, near the windshield, and even at the rear, over the rear window. At this time, Curt and I ‘talked’ about making some small fiberglass ‘scoops’ and how we might try to sell them in the magazines. First, we would get a ‘how-to’ story published to get some ‘free ink’, then we would advertise them. Believe we made a couple, but that’s as far as it went.” Then Bud thought it would be even cooler and a better opportunity if they were to build fiberglass T-Bucket bodies.


Bud was a skilled Navy photographer and after his discharge he moved to Oregon and began doing freelance photography for Petersen Publishing‘s Car Craft and other magazines. Here’s how Bud recalled it: “After I moved to Salem, Oregon, I joined a car club that met monthly at Salem Speed Shop. Another shop, North of Salem, was known as Wescott’s Auto Restyling. Dee, the owner, was hopping up engines, etc. Soon, he began making fiberglass fenders for Model A’s, ’32 and ’34 Fords, and such. Glenn Volz, owner of Salem Speed Shop (the biggest in Oregon) was stocking these fenders and selling them. Glenn asked me to photograph them and produce a flyer, which he began mailing out. The parts were labeled, ‘Fiberglass Ford Fenders’. Somehow, Ford Motor Company execs learned of this, and came down on him. So, Dee changed the flyer to read: ‘Fiberglass Fenders FOR Fords’. Ironically, some years later all the auto manufacturers began sponsoring both drag and NASCAR race cars.”

Shortly thereafter, Car Craft editor Dick Day offered Bud a fulltime job so Bud moved to Hollywood. Upon becoming a Petersen staff member as associate editor and photographer, Bud, and all the other staff editors, had to have and use their own cameras. So happens Bud owned a Hassleblad, the finest film camera in the world. He taught Curt how to use it to photograph cars, and Curt soon purchased his own Hassleblad. Curt had also returned to SoCal and soon began photographing custom cars and street rods for many magazines. With a little tutoring from Bud on how to shoot cars “the Petersen way”, Curt quickly became a Petersen freelancer as well and Curt worked primarily with Bob Greene and Tex Smith doing photo shoots for Hot Rod magazine.

With Bud and Curt together in the hotbed of hot rodding, they were ready to move their fiberglass T-Bucket business forward. They talked to Car Craft art director, Art Smith, and said they wanted to run an ad for their new business but they didn’t yet have a product to photograph. Art obliged by providing renderings which were used in their first ad announcing their new fiberglass T-Bucket bodies in the August, 1960 issue of Car Craft.

The ad announced the introduction of the new “Glass-Tee” roadsters, with the T-23 model being a 1923 Ford style T-Bucket priced at $109.50 and the T-27 was a ’26-’27 style Ford T roadster at $124.50. When I ran across this ad while doing research on the history of fiberglass T-Buckets, two things caught my attention: the rounded cowl looked more early Dodge than Ford T-Bucket and who is Custom Associates? Now knowing it was a rendering explains the cowl, as well as the somewhat abbreviated deck on the ’27 T-Bucket. As for Custom Associates, that turned out to be the new business of customizer Karl Krumme, who plays a key role as this story unfolds. (Custom Associates was later known as Kustom Associates and Kustoms Inc. at 1021 E. Broadway, which was adjacent to the 1019 E. Broadway, Glendale, California, address used in the ad). While the ad used the Glendale address, on the same page in the “CC Shops” new product section, the Glass-Tee Roadsters of Custom Associates were also mentioned with the same renderings, but the address was 4585 Fountain Avenue, Hollywood. Now, the story really gets good. Click here for Part 2>