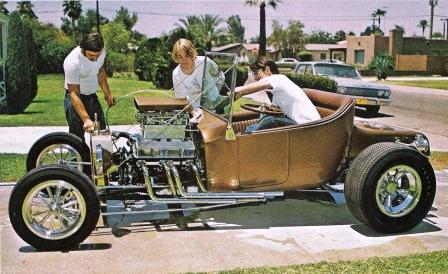 Originally published Sept. 6, 2010 Almost two months ago, I read the headlines about a Top Alcohol drag racer who lost his life in a tragic accident at an NHRA event in Washington. It wasn’t until almost a month later that the familiar name hit me: Mark Niver. This was the same Mark Niver whose T-Bucket captured my imagination when it first appeared in the January, 1974 edition of Rod & Custom magazine. A copy of Mark’s memorium will help put the rest of this post in perspective:

Mark Allen Niver crossed his last finish line a winner on July 11, 2010 in Seattle, WA. Mark was a kind and loving man who had a passion for his family, his sport, and his life like no other. Born on January 13, 1950, in Norwalk, Ohio, he is survived by his wife Tanis, his 2 daughters, Cory (Ron) Johnson and Samantha West and 4 grandchildren, Cody, Jessica, Alexis and Angelina. Mark is also survived by his mother; Clara, brothers; Keith, Randall and Gary and his sister, Laurie. He leaves behind a host of extended family by marriage and the racing community throughout the country. Mark was the owner operator of Billet Machine. Known and respected as an ethical businessman, gracious competitor and a meticulous craftsman; he was a leading machinist in the valley for over thirty years. He had a great love for creating things with his hands; a true innovator. Mark had a lifelong passion for drag racing, and he spent countless hours crafting parts for his racecar. He cherished this sport; because it was one he enjoyed with all of his family. Mark and Tanis loved to travel with family and friends, especially to Hawaii. In our hearts he will always be “King of the World!”

Not only did Mark’s fabulously detailed T-Bucket, which he built in his early 20s, leave an indelible impression in my mind, but more recently it’s memory was revived through the pages of Hot Rod Deluxe magazine. The March 2010 issue in a lengthy “Treasures of the (Petersen) Archives” ran the following photo with the caption “We have no idea where this came from, but it’s a great picture of three young guys with a very cool hot rod in the driveway.”

I thought about dashing off an email to editor David Freiburger, noting the R&C issue (which was almost single-handedly produced by Bud Lang, with contributions by Gray Baskerville) but it’s been past experience that at least half a dozen others beat me to the punch on such exchanges. Fortunately, one of those who did, Rick Shindell, actually knew Mark Niver and was able to add the following: “Mark Niver and David Hill of Phoenix, along with neighborhood friend John Herbert. Mark built the car in his backyard — the frame is double tube bent around a telephone pole in the alley behind his parents’ house and had transverse torsion bars in the front crossmember supporting a tube axle he fabricated from scratch. The rearend was homebuilt independent suspension with a 9-inch Ford center, Corvair outboard parts, and Jaguar (’74 R&C said Triumph TR-3) brakes. He did his own paint and upholstery and molded the gas tank in his sink.”

And as a preview of his machinist skills, which would become his profession at Billet Machine, the article noted that the taillight above the rear license plate was fabricated “from a block of aluminum!” But that wasn’t all. Mark had also fabricated an emergency brake that attached to the nose of the rear end pinion gear and used a go-kart caliper and homemade aluminum disc. This T-Bucket was first class all the way and even featured stainless steel windshield stay rods. The tunnel ram equipped small block Chevy was mated to an aluminum powerglide. Looking out the T-Bucket’s windshield you get a good view of the carb scoop Mark also made himself, which was in addition to the throttle linkage, shift console and who knows what else. Such talent!

Almost 30 years later, Mark’s hot rod fabrication talents were chronicled in the May 2, 2003, issue of National Dragster in Bruce Dillashaw’s story, “Almost Never Niver”, which was appropriately subtitled “MARK NIVER COULD WIN MORE OFTEN WITH STORE-BOUGHT PARTS, BUT WHAT FUN WOULD THAT BE?” The story followed Mark’s victory in March, ’03 at the NHRA Lucas Oil Drag Racing Series event in Tucson, Ariz., which was his first in 20 years and 10 days and only his second in 30 years of racing.

Dillashaw went on to capture the essence of Mark’s mechanical genius spirit and I believe part of that story is a very fitting memorium to Mark as a machinist, fabricator and racer: “The big deal for Niver, an expert machinist for 35 years, has always been trying to win with parts that he makes. His car is an anomaly in an eliminator that otherwise is much like the lower Sportsman classes; in Top Alcohol Dragster, it is possible to assemble a complete turnkey car and never fabricate or build anything. By contrast, Niver built the chassis (12 years ago), cylinder heads (old-style Donovan replicas that he fabricated from billets without blueprints 13 years ago), rear end (25 years ago), injectors, rocker arms, valve covers, barrel valve, main bearing girdle, and fuel tank, among other pieces.”

“Winning is not the most important thing to me,” said Niver. “I enjoy making parts, trying new ideas, and seeing how well they work on the track.”

“He worked with Norm Drazy in 1988 to develop Drazy’s new PSI screw supercharger and put his name in the headlines at the 1988 From Autolite Nationals when he ran a 6.25 (low e.t. of the meet), but Gary Southern, driving Dale Smarts dragster, got the recognition for using the PSI when he won the U.S. Nationals a month later.”

“As is characteristic of a machinists like Niver, the appearance of a part is almost as important as its function. The key to Niver’s recent performance turnaround are injectors that he built 12 years ago after Warren Johnson gave him the dimensions for the runners. ‘I thought the manifold was ugly, so I let it sit on the bench all of those years,’ Niver said.”

“Niver’s performance is proof that you don’t need to have the latest parts. Every Top Alcohol Dragster entry uses modern KB, BAE, Rodeck, or Fontana blocks with the latest Alan Johnson, BAE, or Veney cylinder heads, but Niver’s engine block is one of the original aluminum Donovans that debuted in 1972 as a replica of the early 392 Hemis. He has just the one in the car and one set of spare cylinder heads that he built. Parts are no longer made for Donovans, and Crower is one of the few companies that still make crankshafts for the supposedly outmoded engine design. ‘I still use a Donovan engine, but does that make a difference? No, but it is a pretty good excuse.’ Niver said of his time between final rounds.”

The employees of Combustion Technologies USA were life-long fans of Top Alcohol Dragster racer Mark Niver. After his passing, they offered these stickers to racers, friends and fans of Mark Niver, with 100 percent of proceeds donated to Racers For Christ on behalf of the Niver Family in Mark’s memory. A recent Hot Rod online feature on Dave Kommel‘s drag racing photography of the 1970s included this shot of Mark Niver’s Pro Comp dragster at Orange County International Raceway in Irvine, CA in 1977.  What’s important to note is that in the photo caption, Hot Rod said, “Niver was an immensely talented fabricator and machinist who built many of his own parts, including cylinder heads and rear ends, and was one of the nicest guys to ever wear a firesuit.”

The T-Bucket world is fortunate to have been graced with the spirit of Mark Niver.

4 thoughts on “Mark Niver: He Crossed His Last Finish Line a Winner”