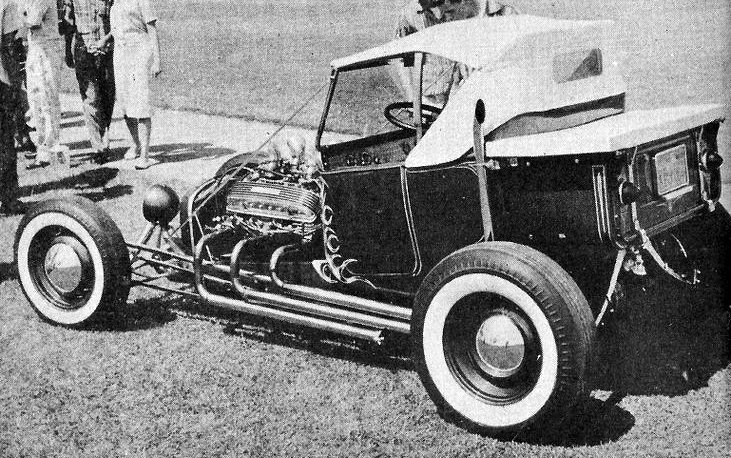 With the 2016 T-Bucket Nationals in Indianapolis less than 30 days away, I thought it a good time to write about what I consider the best T-Bucket car show ever! That’s saying a lot, but you have to put it in perspective. It was 57 years ago. T-Bucket hot rods were in their infancy. But what a show it was!

OK, it was not strictly a T-Bucket car show. But it earned that distinction by virtue of the notable T-Bucket hot rods of the day that were entered there. While announced as the inaugural event at Disneyland, for various and sundry reasons the “Car Club Day and Autocade” was not repeated. Which makes it even more notable. The only coverage of the show was in the March, 1960 issue of the the old Rodding & Restyling magazine. This was one of the “little pages” books that sold for a quarter but unlike the Car Craft, Rod & Custom, Hot Rod and other Petersen Publishing titles of the day its editorial offices were in Manhattan, rather than Los Angeles. They devoted eight pages to coverage of the show, which they appropriately titled “Cream of the Crop”. To start, the show featured the most famous T-Bucket of the day, Norm Grabowski’s Kookie Kar, which was still being actively featured in the ABC detective drama, 77 Sunset Strip. The Disney Autocade really became a T-Bucket car show with the entry of the Bob Johnston T-Bucket that would later become Ed “Big Daddy” Roth’s famous Tweedy Pie that was memorialized in millions of model car kits and still exists today. And speaking of Ed Roth, the show also featured Big Daddy’s Excaliber, later to be know as Roth’s Outlaw after discovering the difficulty people had in spelling the original name. While technically not a T-Bucket body, that was what inspired Ed’s creative composition that became the forerunner of a generation of show rods. It was interesting that this very excellent coverage of a West Coast car show was featured in this East Cost mag. Also, that it was not credited to anyone. However, the George Barris Kopper Kart custom pickup was the first car shown in the feature, another pickup was credited as Barris-built and the photography, although just show coverage, was of George Barris quality. But why would I assume that? Now it really gets interesting. The famous Ray Anderegg 1926 T roadster was there and collected one of the rare dash plaques shown at the top of this story. In 1955, Ray’s former coupe, with its top chopped off, tied with Blackie Gejean‘s ’27 T Shish Kabob Special for the America’s Most Beautiful Roadster title. By 1959, Ray had reworked his T with a small block Chevy engine and stunning gold paint. It was on the cover of Car Craft magazine that year, photographed for the feature by George Barris. But the Anderegg T was not included in the Rodding & Restyling coverage of the Disneyland show because it would be featured on that magazine’s cover four months later. Note the stunning similarity. For the Rodding & Restyling cover it appears Ray was asked to remove the top and step aside while the female model took up a near identical pose with his T roadster. The photo on the cover with the hood and top is a mirrored image of one used in Car Craft (actual driver’s side had the steering arm exiting the hood). In the feature article, there’s Ray Anderegg in the same pose wearing the same clothes as shown on the Car Craft cover, with the only difference being his hair being a bit windblown to display the popular 50’s “Elephant’s Trunk” style.  But wait a minute. Also, many of the shots are from the same angle and with the same brick wall background as the earlier Car Craft feature. The guy in the photo identified as the owner is not Ray Anderegg, but Richard Andre.  And the contributor of the story and photos is credited as Bob Hill. Hmmmm. Then in May, 1962, the Ray Anderegg T roadster appears again in the little pages mag, How to Hop Up Your Engine from the same company that published Rodding & Restyling. With many of the exact same photos shown in the Rodding & Restyling feature. Again, the owner is identified as Richard Andre instead of Ray Anderegg. But this time the feature is credited to George Rinehart. Hmmmm. Ray Anderegg — Richard Andre. George Barris — George Rinehart. Hmmmm. I can only imagine that George Barris’ work and the car of Ray Anderegg may have had a pseudonym used in order to avoid some contractual issue with Petersen Publishing, for whom George was doing a lot of photography and customizing how-to features back then.

But back to what I believe was the best T-Bucket car show ever. Since it was at Disneyland in Anaheim and there were L.A. Roadsters cars participating, it’s very likely that Marty Hollmann‘s T-Bucket was also there and an excellent chance that fellow L.A. Roadsters member Bill Rolland was, too, having purchased the legendary Tommy Ivo T-Bucket. Therefore, you see why I feel confident calling this the best T-Bucket car show ever.

But, if you’re ready to attend what will be the best T-Bucket car show of 2016 I highly recommend you make plans now to attend the National T-Bucket Alliance T-Bucket Nationals in Indianapolis, July 6-9, 2016.

4 thoughts on “The Best T-Bucket Car Show Ever!”