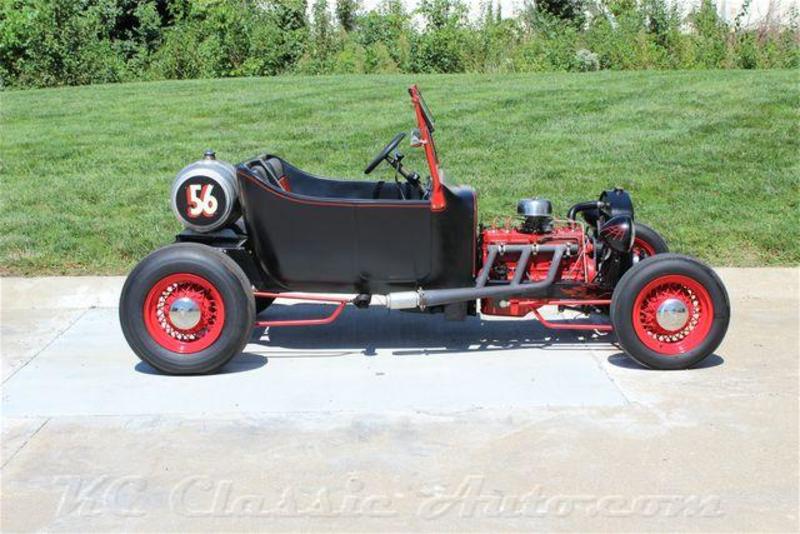 A Bird T Bucket kit inspired legions of teenage hot-rodders-to-be in the 1960s and 1970s. The advertised prices were eye-popping and even a $1.25 an hour minimum wage grocery bagger could save up to order one.

It so happens that I’m familiar with the Bird T-Bucket pictured in this article, having first encountered it at the 2005 T-Bucket Nationals. It caught my attention more recently because it’s now for sale. While hundreds, if not thousands, were sold it’s surprisingly rare to see one today. There are a few factors contributing to that. First is the sad fact that very few of the hot rods built 40 to 50 years ago have survived. They were unfortunately either lost as a result of an accident or neglect and ended up in the scrap yard or were parted out for other projects. The second fact contributing to the scarcity of seeing a completed Bird T Bucket kit today is the fact that a lot of them never were completed. Why? Lots of reasons. In the 60s and 70s military service interrupted the plans of many young men. Others had to let their projects gather dust when they went away to school. Still more found that marriage and a family left little time and money to complete their Bird T Bucket kit. Of course, there are still uncompleted kits out there to be found. In fact, we did a story on a recent garage-find uncompleted Bird T Bucket kit not long ago. In the above photo you’ll note one of the unique Bird T-Bucket frame characteristics: a channel steel frame with a channel front crossmember under which the spring attached, which was a nice low-budget alternative to the tubular front crossmember and spring perch. The other thing to consider is that these “kits” were sold in various stages. The most basic was just the fiberglass T-Bucket body and the welded frame. A step up from that would also include the fiberglass T grille shell and the patented seat insert, which not only provided reinforcement for the body but also had nicely formed semi-bucket seats and a floor. Of course, all the packages came with the Bird T-Bucket Plans which we’re proud to be authorized to sell along with a nice Bird history today. True to form as a budget hot rod, most were offered simply with just the T-Bucket body and not with a turtle deck or pickup bed. Rather, they were of the bobtail T variety with the fuel tank mounted above the rear crossmember. One thing that made this particular Bird T-Bucket very memorable to me was its totally unique powerplant. It’s not often you see a hot rod powered by a 6-cylinder Rambler flathead engine. But, this T sports a 1963 Rambler flathead and it’s interesting to note that AMC was one of the last companies to discontinue flathead engines in production passenger cars and they were still putting them in 1965 models. A very reliable and economic engine I understand the flathead six is mated to a Rambler “Flash-O-Matic” automatic transmission, which was made by Borg-Warner. Since this particular Bird T-Bucket was likely a body, seat insert, frame and grille shell package it has some suspension features that are a bit different from what was shown in the Bird T-Bucket Plans. Most notably, a coil spring rear suspension. The radius rods are also a bit different from those shown in the Bird plans, but that was something entirely up to the builder because as in most T-Bucket builds there are almost no critical, must-do-it-this-way components. That’s what makes them so much fun. The I-beam front axle on this one looks like it may have come from under a pickup with the parallel spring pads removed and radius rod batwings added much like described in “How to Build a T-Bucket for Under $3000“. I especially like the beer keg gas tank, which certainly evokes a lot of 1970s style. As an aside, that style of keg is not used much anymore by breweries, having been replaced by the not very attractive straight-sided kegs. While the fiberglass seat insert had its advantages, the divider between the pseudo bucket seats didn’t leave much room for driver or passenger side-to-side mobility. On the other hand, it’s a snug, safe feel. In this particular Bird T-Bucket it looks like they may have added one of the nice ’32 Ford-style dashboards made by Spirit Industries, which is a nice addition for any T-Bucket body with a simple straight-across thin dash panel. The long handle Lokar shifter in this one is a nice touch, too. You’ll see that this one is adorned with an autograph from the late legend, Norm Grabowski, otherwise known as Father of the T-Bucket, Woo-Woo, Normie Poo, El Polacko, the Rod god, Norm Grab Assky or simply Uncle Norm. Of course, Norm was in attendance and doing his thing at the 2005 NTBA T-Bucket Nationals where I first saw this T, so it’s the real thing. Call me crazy, but I’m a big fan of the simple utilitarian look of a T-Bucket body with a fuel tank mounted behind. Plus, it’s a budget approach to building a T. In my mind, this is a distinctive looking little T and I was really surprised to see it for sale recently through KC Classic Auto in Kansas. To me, it’s fun to look at these older T-Bucket builds and impressive to think that something that might have been built 40 or 50 years ago can still have such an impact today, even with only minor upgrades. The Bird T-Bucket played a big role in helping popularize T-Buckets to the midwest masses who previously were dependent only on Southern California for T-Bucket building material. A Bird T-Bucket today is a great bit of nostalgia that’s every bit as much fun as when it was first introduced.

1 thought on “Bird T Bucket Kit: What an Assembled One Looks Like”