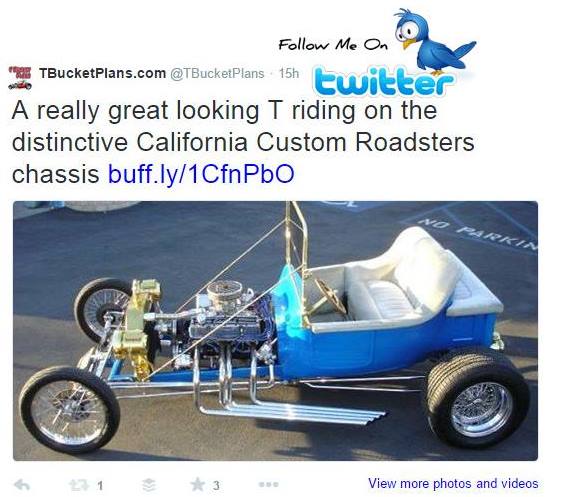 Twitter hot rod tweets are growing like crazy! As you may know, the social media site/app Twitter has 284 million monthly active users and 500 million Tweets are sent per day. Now, more and more of those tweets relate to hot rod and T-Bucket interests. TBucketPlans.com has been on Twitter since 2009. But, we’ve really seen a lot more activity in the past year. 1. Great T-Bucket Photos and Links to Our Stories

Many of our Twitter hot rod Tweets contain cool photographs of T-Buckets that we think you’ll find both inspirational and informative for your own T-Bucket build or interests. We follow a very large number of others’ Twitter hot rod Tweets and whenever we see something of interest to T-Bucket fans we Retweet it so that our followers will be able to see it too, since it is likely to be from someone they don’t follow. 3. Retweets About T-Buckets and T-Bucket Projects for Sale

The vast number of Twitter hot rod tweets we follow also includes almost daily new listings of T-Buckets for sale as well as T-Bucket projects in various stages that can be purchased economically. We Retweet those to our followers, too. So, if you haven’t already, follow TBucketPlans.com on Twitter. And whenever you see one of our Twitter hot rod Tweets you like please Retweet that to your own followers to share the love. We welcome you sharing your T-Bucket pics and news as well with us via Twitter and when you do we will be happy to return the favor and share that by Retweeting to our Twitter followers, which is now close to 1000 and growing.

By the way, whenever you like a story here at TBucketPlans.com you can easily share that with your followers on Twitter by simply clicking the middle light blue bar either at the top or the end of the story. Thanks.