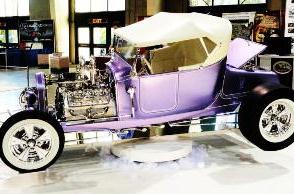 Man, time sure flies. I can’t believe it’s been over six years since I first published this three-part story on Russ Freund‘s “Takeout T”. But I just noticed that it’s on the cover of the latest issue of Traditional Rod & Kulture Illustrated 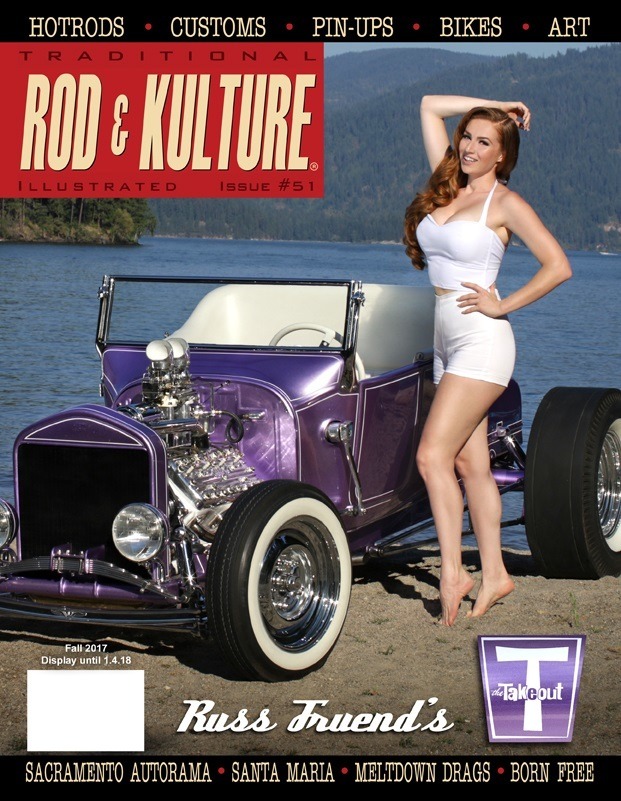 This is a stunning T and you’ll probably want to pick up a copy of the magazine as well as see how this awesome T came about in this 3 part series. Enjoy.

Chances are that if you keep up on the hot rod and custom car world via the Internet you’ve already been impressed by photos from either the Grand National Roadster Show, the Sacramento Autorama, Starbird’s Tulsa Show, or the Detroit Autorama of Russ and Lora Freund’s award-winning T-Bucket, The Takeout T.

This car is so well-done, so right for the time and so downright cool that it’s certain to get significant coverage by the hot rod print media. But there are two things about this terrific T that loom large from my perspective and our coverage will focus on those:

1. No other T-Bucket has had such an impact on the show car world in over 20 years.
2. No garage-built hot rod has come so close to the coveted America’s Most Beautiful Roadster award in over 40 years!

Let’s address significant achievement number one with a quick history lesson. Known as the “grandaddy” of all hot rod and custom car shows, the first Grand National Roadster Show (GNRS) was held in 1950 and the iconic nine-foot-tall trophy signifying “America’s Most Beautiful Roadster” (AMBR) was first presented to hot rodder Bill Niekamp, thusly recognizing his now legendary 1929 Ford roadster. In each of the subsequent four years, all of the winners were Model T-based rods. Throughout the 50s AMBR winners were, by and large, built by average hot rodders and customizers of average means with conventional resources.

Then, things shifted in 1962 when George Barris simultaneously won the big tropy with his Twister T and raised the AMBR bar forever. With its fuel injected DeSoto hemi and Metalflake Peacock Green paint, the Twister T incorporated many of the high quality, professional details that a master builder like Barris was famous for. In their book, “The Oakland Roadster Show, 50 Years of Hot Rods and Customs”, Andy Southard, Jr. and Dain Gingerelli observed that “a review of the subsequent AMBR winners during the 1960s clearly illustrates that home-built hot rods no longer qualified as favorites for winning America’s most prestigious roadster award.”

On the bright side, though, T-Buckets did come back to dominate as AMBR winners 7 times in the decade of the 70s. And then things changed quickly. Virtually all the subsequent AMBR winners were of the 1932 to 1937 vintage, mostly deuces. The last T-Bucket to win AMBR was Ermie Immerso‘s Golden Star back in 1991. Which brings us to Hot Rods by Freund’s The Takeout T today. This isn’t some cleverly staged photo of an AMBR-contending show rod in somebody’s garage. It’s The Takeout T in Russ Freund’s own 18×24 garage in Post Falls, Idaho where he and his friends built this stunner. To understand such an accomplishment, it helps to know about Russ’s hot rod building background. Russ’s father is Claude Freund, who started building hot rods when he was 13 and has been building them ever since. You may have seen Claude’s ’32 Ford roadster that racked up an incredible list of awards back in 1997. Claude was inducted into the Washington State Hot Rod Hall of Fame in 2007. More recently, in a feature on his ’33 Ford roadster Street Rodder magazine observed that “some would say that Claude built a car that’s relatively timeless … but this car very much has a time: this is a today car.” So, Russ had a great teacher. It also helped that Claude had been an ISCA car show judge for many years and, after observing that most of its judges were aging and they would be facing a future “skills gap”, the ISCA began a program to bring younger judges into the fold years ago. Russ was fortunate to enter that world while still in high school and that “up close and personal” exposure to many spectacular show rods has served him well.

After entering the rod and custom building field, Russ’s skills came into play on the construction of a 1938 Lincoln Zephyr which was recognized by Goodguys as “America’s Most Beautiful Street Rod” and became the highest priced hot rod ever sold when the gavel came down at $432,000 at Barrett Jackson’s Scottsdale auction in 2004. If that wasn’t achievement enough, Russ also worked on the 1936 Chrysler Airflow (pictured above next to Russ’s under construction T Touring) that broke the record the following year when it sold for $550,800. Russ and his dad also had a hand in rebuilding an old custom ’57 Chevy which was sold to Jon Budda, covered in a great Rod & Custom story and named Goodguys “Kustom of the Year” in 2009. “I’ve always loved Model T’s,” Russ said recently in discussing how the Takeout T came about. As evidence of his Tin Lizzie love, you probably recall seeing the eye-catching ’24 T Touring he built a few years ago which appeared on the September, 2007 cover of American Rodder magazine.

Not too long after completing his green “Mantis” T Touring, a friend had a couple of steel T roadster quarter panels for sale for something in the vicinity of $150 and since he’d already been collecting T parts Russ bought them. Of course, one thing leads to another and the next thing you know Russ started mocking up a T roadster about three years ago in his former home garage, which was only 17×18 and shared space with his Mantis T. After the initial layout, Russ fabricated a chassis and starting hanging some traditional hot rod suspension in the form of an early Ford banjo rear end and I-beam dropped front axle connected with split wishbones.

But, before we go too far we want you to know that we’ll leave it to the print media to lavish upon you the glamor shots of which this creation is so deserving. After all, what we’re all about here is building T-Buckets and no finer example exists than what Russ Freund has created in his home garage. It should serve as inspiration to everyone. Russ was thoughtful enough to take many “under construction” photos of his T and we can all learn by studying them. Sit back, though, because this is Part 1 of a 3-Part story — a story we know you’ll enjoy. Being the Model T fan that he is, Russ already had other body parts to complement the quarter panels, although the firewall and door in his possession had come off a touring car. As is often the case, a few things happened back then that delayed Russ’s T project a little. He moved (as you’ll note from different garage appearance in later pics) and ended up selling his embryonic T hot rod to a friend. Long story short: after about a year it was Russ’s T once again. You’ll also note that Russ likes to try out different wheel and tire combinations, which can completely change a car’s appearance and is something he did with success on his Mantis T Touring. If you look closely, you’ll also notice the appearance of rear radius rods and an initial mockup of the Ford flathead engine. With the body cherried out, attention is turned to the T’s turtle deck in a coordinated fashion so that it blends in perfectly with its surroundings. Here’s a nice view of how the rear shock mounts attach to the frame, as well as a glimpse of the radius rod attachment to the rear axle and the notching of the frame for axle clearance. You’ll note that the turtle deck is absent in this view. And here you see the eye-pleasing result: a subtle rear shock mount that blends in perfectly with the turtle deck and chassis. We’ll move on with this fascinating build in Part 2.