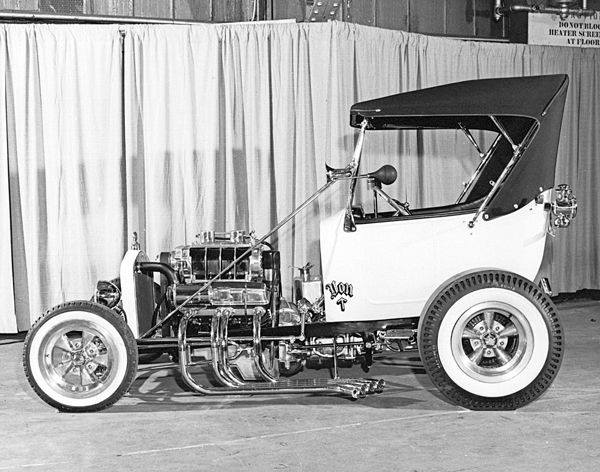 Yesterday, the distinctly different proportions of the Von Esser Speed Shop “Von T” jumped out of my Facebook newsfeed. With a tall top almost as high off the ground as its stubby wheelbase is short, you just have to admit that the Von T is in a T-Bucket class all its own. And I’ve held a special fascination with it that has roots back before my teens. As a kid, I was devouring every issue of Hot Rod magazine back in the late 50s. The Von Esser Speed Shop name was burned into my brain because it was one of the only Midwestern speed shops to advertise back then. Being smart, Von Esser’s ads were often “co-op” ads where the cost was shared with the manufacturer whose products they were promoting. The Von Esser brothers were avid racers who grew up on Chicago’s South Side. By around 1949 Bill Von Esser had moved to the North Side, opened his speed shop and put together a catalog. The appeal back then was for Midwestern hot rodders not to have to wait weeks to get parts delivered from California and pay extra for shipping. Bill rather quickly became a successful entrepreneur. I’d be remiss not to mention that in 1954 Bill entered a new Corvette in the famed Panamericana race in Mexico. This was one of the first races in which a Corvette was ever entered. Plus, it was the international debut of the Corvette. Unfortunately, the modified Blue Flame inline-six cylinder engine had parts breakage that took the Corvette out of the race during the first section.

As an interesting coincidence, the late Don Kendall who built two very radical T-Buckets among many other hot rods worked part-time in the 60s at the Von Esser Speed Shop porting heads. It’s likely that work helped fund his low-slung Max Wedge powered T-Bucket. But, that’s a story for another day. In 1963, after 4 years of construction and refinement, Bill Von Esser debuted his unique T-Bucket show rod, the Von T. It was specifically designed to promote his business and featured the latest speed equipment of the day. Said to have been a rolling advertisement for the Von Esser Speed Shop’s wares, the Von T featured a high horsepower blown Chevy and quickchange rear end, while at the same time sporting carriage lamps, a big buggy-style bulb horn and a tall-T top. At the time, it was quite a sensation in shows and I recall seeing a couple of features on it in the second-tier mags of the day shot by Midwestern photographer, Bob Hegge. The chassis, which featured lots of chrome suspension parts, was constructed by midget race car builder Max Reichenbach who must have first hooked up with Bill in his midget racing days with his brothers. Even the transmission and radiator were chromed and, of course, its chromed headers were one of its most notable features. With it’s 6-71 blown engine, Scott fuel injection and Isky cam the Von T was claimed to deliver 560 horsepower and was valued at an eye-popping $11,000 over 50 years ago.

I’d pretty much forgotten about the Von T until I learned that it reappeared at the 2003 Hunnert Car Pileup, which was still being held back then at the original Marty & Sons Body Shop & Painting in Sycamore, Illinois (which also houses Suicide Axle Hot Rods). So, I was especially excited to see the Von Esser Speed Shop Von T on display at the 2013 World of Wheels car show in Chicago. I learned the Von T had been acquired and lovingly restored by Wally Shatkus of Downers Grove, Illinois, who had also been a long-time fan of the car. Only small changes had been made over the years to update the car, like changing the driveline from the chromed 4-speed manual and quickchange to an automatic transmission and conventional differential. While the Von T was introduced without front brakes, as was the style at the time, in the interest of safety disc brakes were added. A unique Von T feature was the deeply dropped front axle with the spring mounted on top, rather than the more conventional behind the axle arrangement. By mating the axle drop spacing to the spring length a very nice, smile-like appearance was achieved. I had previously thought the Von T profile looked a bit strange, with the seemingly large gap between the back of the engine and the firewall. But seeing the Von T in person I quickly realized that gap between firewall and engine housed the fuel tank. Running just the bobtail T body, without pickup bed or turtle deck, the question became where was one to put the fuel tank. Evidently Bill Von Esser’s answer was up front rather than under the body. While some T-Bucket builders have located the fuel tank below the bench seat, that wasn’t an option in the Von T, which sported a couple of the popular competition style fiberglass bucket seats in its nicely turned interior. Speaking of the interior, I especially like the dash treatment with the pod for instruments mounted on the nice engine-turned dash back panel. For the uninitiated, you’ll note the rather high profile of the Von T in the photo below. This is a result of a number of factors. The most important being that the fiberglass body is not channeled over the frame rails, which when done on most T-Buckets lowers the stance by the typical 3 inch height of the frame rails. In addition, although the front axle has a lot of drop that is offset by the spring being mounted on top of, rather than behind, the axle. But, overall the tall profile is one of the nice distinguishing features of the Von T. I’ll venture you haven’t seen one quite like it before.

Below is a great little video put together by Wally’s son showing some of the legacy Von T photos and magazine spreads, as well as the Von Esser special after its restoration by Wally.

To add to your video viewing enjoyment, below is my own up close and personal video of the Von T from the 2013 Chicago World of Wheels Car Show.

Major props go to Wally Shatkus for undertaking the restoration of the Von T. I’m a big admirer of this 50+ year survivor. If the weather’s nice, you’re just as likely to see Wally at a local cruise-in as at a major car show. The primary difference being swapping the Scott fuel injection for more streetable Stromberg 97s when Wally is driving the Von T. While it’s a decidedly strange looking T-Bucket, with its unchanneled body, bobtail rear, and engine too far ahead of the firewall for the taste of some, I’m a real fan of the bobtail T look and this is one of my favorites dating back almost five decades. Seeing it today makes it even sweeter.

April 1, 2018 P.S. The Von T maintained its show car presence through the 1970s, adapting a wild custom paint job as noted in this photo from the 1974 Chicago World of Wheels show. 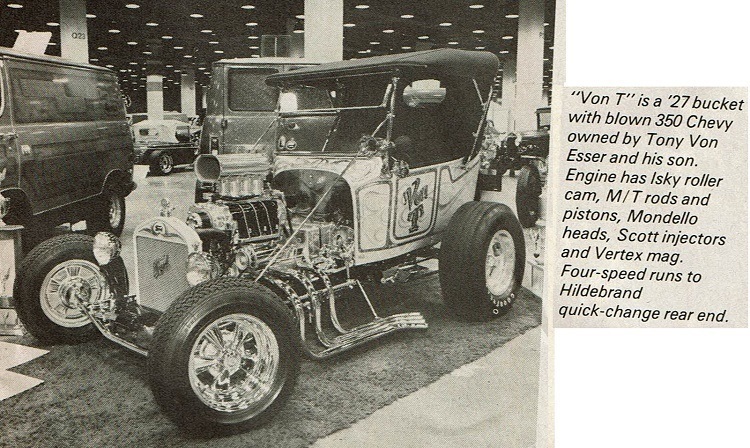 Other big additions for the times included the four-port injectors and Cragar front wheels.