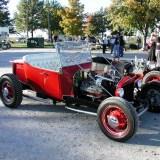 If you’ve already purchased the eBook version of Chester Greenhalgh’s legendary “How to Build a T-Bucket Roadster for Under $3000“, then you’ve had a chance to read about Chester’s traditional flathead powered T-Bucket roadster that he built, based on an Essex frame.

That flathead-powered T-Bucket played a very important part in Chester’s “how to” book self-publishing, which started in the mid 1980s. According to Chester, “It took me a lot to bring that book to the enthusiasts. It took a year to write it, and another year to type it good enough to copy. If you have the spiral bound original book, there were only 800 of these ever produced. Lord only knows how many are left. Since I correlated, cropped and bound every one of them myself working far into the night, my fingerprints will be on every page and impossible to copy. Those originals cost me $12 each to print, and the first issues were sold at a loss to try to recuperate some of my investment and to also quiet a bitching wife. In the end I had to sell my flathead ‘T’ to catch up on the bills. If you look at the photo above from Chester’s book, you’ll see his Flathead T-Bucket at the far left in the row of T-Buckets Chester had built sitting outside his old Naples, Florida shop. After selling it, he lost track of that T, until we received the following message not too long ago from hot rodder Jeff Forsythe in Aurora, Illinois:

“Hi Chester – I think I owned your red T-Bucket back in 2004. I’m trying to locate some pictures. By the time I got it, the exhaust was more stock, the dash was replaced (with Corian countertop!) and it had a Model T steering wheel. I’m trying to find some pictures, unfortunately they are stuck on a dead computer. The flathead was consuming a lot of oil and the ’39 Ford 3 speed needed to be rebuilt. I decided to sell because I had too much going on in my life to redo the engine/trans.

It was a great little car, fun to lock up the brakes. The molded frame was a work of art. It had a fake quick change on the rear end. The bed had a spun aluminum tank and expanded metal on the bottom.

I bought it from a guy in Ft. Wayne, Indiana and sold it to a guy down south. I wish I had known the history back then, I never would have sold it! I really liked the T-bucket download. I bought a copy when it first came out. That’s how I discovered the history of the car I owned. You guys are giving me the fever to build another bucket if I ever get my stupid ’66 Chevy truck done. –Jeff”

After looking into it further, I learned that Jeff had driven the T to the 2004 Hunnert Car Pileup show in Morris, Illinois and coincidentally had become friends with all of the Chrome Czars and has volunteered at the last four Hunnert Car Pileups. Fortunately, with a little research we were able to turn up a couple of photos from Pileup #3 showing Chester’s T looking pretty close to the way it did almost 20 years before when he sold it.

After receiving the photos from us, Jeff Forsythe was kind enough to post on the Chrome Czars’ Forum:

“Just received pictures of my T-Bucket at Pileup #3 (2004)! I was very excited to get these pics today. I thought all the pictures of my T-bucket were long gone in a hard drive crash. This is a flathead powered T-bucket originally built by Chester Greenhalgh on a ’26 Essex chassis. It had a ’39 Ford 3 speed, an early glass tub, a steel bed, cycle tires and that 70’s staple white diamond tuck interior.

When I bought the car, I didn’t know the history. Chester was the author of a hot rod cult classic book, How to Build a T-Bucket for $3000. That’s $3000 in 1970’s dollars, back when you could buy a donor ’42 Ford or the like for $200. The book was hand typed with photos and drawings by Chester. Original copies are hard to find and sell for quite a few bucks on eBay.

This car wasn’t a $3000 T-bucket. Chester built this as his personal car and he tried to mimic a car his brother built in the 50’s. The attention to detail was very good with the frame all nicely molded in and such goodies as a dagger dipstick. I bought the car from a guy in Fort Wayne. Several changes had been made including the loss of Chester’s wild headers. The guy I bought it from added a dash made of this white Corian type material. I did some improvements/changes like the velocity stacks and stainless radiator pipes in the pictures. I missed half of Pileup #3 because I was fixing a floppy steering column by adding a new Offy drop.

Chester has teamed up with a guy named John. They have put the book online for downloading along with several upgrades. John runs a nice T-bucket website and he’s the one who sent the pictures. I bought a download of the book a while back which is how I discovered the history of the car. Alas, the flathead and trans needed to be rebuilt. I used about 2 quarts of oil driving from Naperville to Morris that day. A guy down south wanted the car so we struck a deal and he came and got it soon after the Pileup. If I had know the history, I never would have sold it.”

We then shared the photos and Jeff’s comments with Chester and his delightful response was:

“Yes, thats definitely my T-Bucket. The wire wheels and antique Sears & Roebuck snow tires (used in early 50s track racing) set it apart as does the unique upholstery job (I traded painting a pickup for that). Also the split radius rods on the front are another 50s touch. On the radiator shell is pinstriping that you can’t see in the photos that says “Nostalgia”, the name of the roadster, done at a rod meet in Miami, Florida by a beautiful girl with a figure that would stop traffic, and a jealous husband that never was far away.”

[contentbox width=”400″ borderwidth=”2″ borderstyle=”solid” bordercolor=”C4160A” dropshadow=”2″ backgroundcolor=”FAEB20″ radius=”2″]So, where has this fine little T been since 2004? If you know anymore about it — or if you might have more photos, please contact me and we’ll keep the story going. Thanks, John
john@tbucketplans.com[/contentbox]