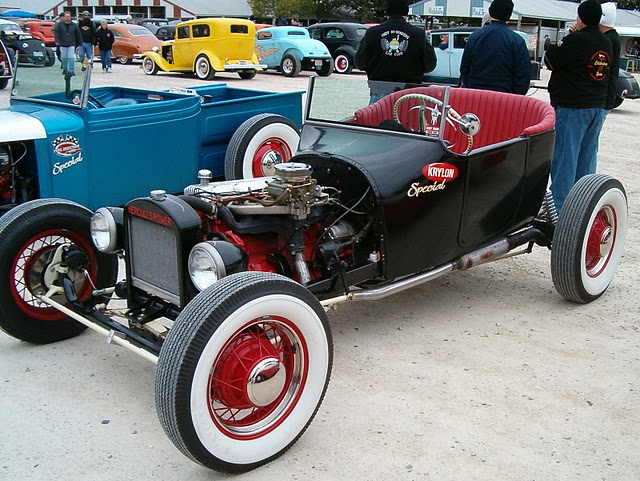 3. Scott Linder’s “Krylon Special”: This Speedway, Indiana T-Bucket is actually a 1918 Dodge roadster (which is a subject for another day) and is so named because it was painted with Krylon enamel spray paint — and very nicely at that. What’s really cool is the 225 cubic inch Dodge slant six that adds even more distinction to a really great looking T-Bucket. The glossy black Krylon finish is perfectly complemented by the red interior, engine block and wire wheels, along with the wide whitewalls and white steering wheel. The engine-turned dash panel is another touch I love on this car which was put together with the help of Scott’s dad at Bubba’s Hot Rod Shop. From the rear, this bucket is a real knockout with the vintage fuel tank and those cool 60s space ship inspired tail lights. While it’s a decidedly strange looking T-Bucket, with its unchanneled body, bobtail rear, and engine too far ahead of the firewall for my personal taste, I give this hot rod major props because its look is totally unique and after 47 years it is very much a survivor. Said to have been a rolling advertisement for the Von Esser Speed Shop’s wares, this T-Bucket sports a high horsepower blown Chevy and quickchange rear end, while at the same time sporting carriage lamps and a tall-T top. I’m a real fan of the bobtail T look and this is one of my favorites dating back almost five decades. Seeing it today makes it even sweeter.

1. Jim Unruh’s Low-Slung T-Bucket: This is one of those T-Buckets that everyone loves because of its “just right” low stance and its many traditional touches. Jim, who runs Lions Hot Rods in McHenry, Illinois, has done an exceptional job executing a modern build of a bucket that looks like it was crafted in the late 50s or early 60s. From its ’37 Ford V8-60 front axle and chopped deuce grille shell, to its three deuces small block and louvered tailgate, this T-Bucket gets long, admiring glances whenever it’s parked and turns heads when Jim goes scooting down the road, almost appearing to be seated on the asphalt. This is one of those T-Buckets where I can honestly say that there’s nothing about it I don’t like. Jim drives it long distances and it’s a timeless classic. While the original Hunnert Car Pileup quickly outgrew its cozy confines in Sycamore, Illinois, and has now outgrown the Grundy County Fairgrounds, I hope its success continues in Decatur, Illinois, some 175 miles south of the original location. And, I’m sure many more memorable T-Buckets will appear over the years.