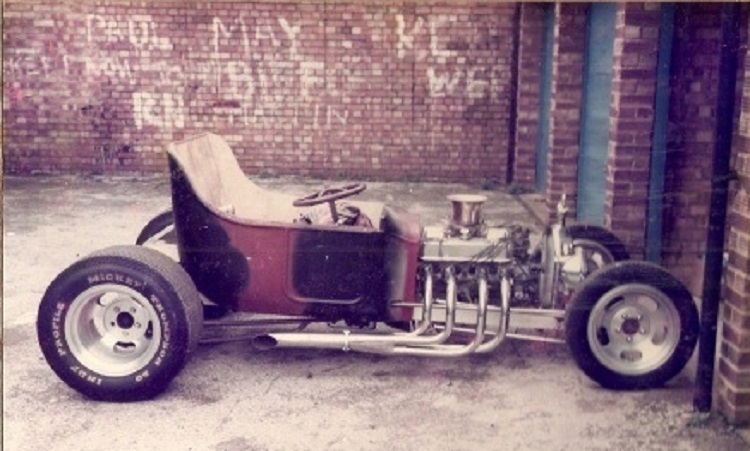 The purchase of an unfinished T-Bucket project at a bargain price can sometimes be a great aid in building a T-Bucket. In this case, Dave Melling was very fortunate in finding an unfinished T-Bucket project that had been started by master builder Ed Wimble. Ed has a great eye for T-Bucket design. But in reading Dave’s account below you’ll note that he also has a keen vision of what makes a T-Bucket look right and appealing. Here are the very first photos of the car that I actually bought. This was in preference to building one from scratch as this car came with lots of work to be done, but with a lot of expensive goodies such as the wheels, radiator shell, headlights, etc. It also included a Rover V8 engine and autobox [automatic transmission], plus two S-type Jaguar back axles, all of which were to be sold off at a later date. Although the photos make the car look half-complete it is really just put together for ease of transport to my lockup. The body is just resting on the chassis and the radiator shell is held in place with a couple of C-clamps.

This shot shows the one header which came with the car. I had been promised the other one but it turned out that they belonged to Ed Wimble and had to be returned to him. The front wheels, although quite small, are not really small enough for my liking

You can see the marks on the body where it has been cut and shortened in the middle, and also that the body/engine/radiator shell are nice and close together, and in a straight line. The Jaguar back axle could do with being a little bit wider though … we’ll see about that … This photo shows the front end set-up, with its drop tube front axle, transverse leaf-spring and friction shock assembly. The stub axles [spindles] are Ford Popular [what we would call an Anglia], and you can see the simple steering rod assembly. All joints on the steering and suspension are rose-jointed [what we call Heim joints]. You can also see how the hubs on the end of the stub axles push the front wheels out even further; the wheels seem to be miles away from the discs.

The front and rear wheels incidentally, are Ansen slot mags, the American equivalent of Wolfrace wheels, I guess. Despite the fact that the front wheels are quite small in relation to any other car, they are just too large and too fat; they overshadow the grille shell and headlights. You can see how narrow the rear is with the S-type Jag back axle fitted.

But Dave Melling was fortunate in acquiring more than you see in these photos when he purchased the unfinished T-Bucket project that was originally built by Ed Wimble for a client. You’ll learn about that in our next installment.