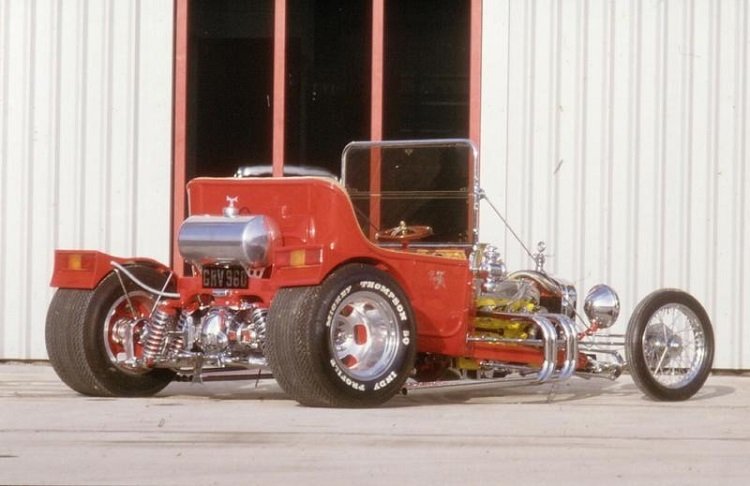 Just as Chester Greenhalgh emphasizes the importance of a cheap donor car in his legendary “How to Build a T-Bucket” eBook, Dave Melling found that especially important for his British T-Bucket build, given the shortage of V8 engines in the U.K. Also like Chester, Dave cannibalized other components from his donor car while selling still others, reducing his donor car investment to almost nothing. The story of Dave’s British T-Bucket build continues.

At the time, Geoff Jago was the only known source of Model T bodies and chassis, so I collected the initial donor parts needed to build a rolling chassis, namely:

The very weekend that I was due to part with the money at Geoff Jago’s, I noticed an advert in Street Machine advertising an abandoned project for sale. It turned out to be an Ed Wimble chassis and body, and although it wasn’t exactly what I wanted, the parts that came with the project made it worth it. The following weekend, I returned to London and bought the abandoned project for £900, a bargain if ever there was one! [At the time, that was about $1,350].

Soon after that I contacted Ed Wimble and arranged to go and see him, really just to pick his brains. However, I spent an entire afternoon with him and came away £180 poorer but clutching the original wheels from his Outlaw. This photo shows the Rover V8 which I bought from a bloke in a pub for £95! It was a runner at the time of purchase but the MOT had expired. [In England, MOT refers to the Ministry of Transport annual inspection for safety and emissions]. I bought it for its engine, gearbox, wiring loom and instruments plus any other parts that I might need. I sold some of the parts on it such as the doors, etc. before it was finally collected by the local scrap yard. I sold £35 worth of parts, so the net cost to me was £60. The date at this time was February, 1983. You can see my Mustang behind the Rover which I still owned at the time. It would be sold in a few months to finance the Model T project. Here is a picture of the engine still in the Rover prior to its removal. It has the standard SU carbs and manifold which will be junked in favour of a Holley 390 and an Offenhauser manifold. This Rover had air-conditioning fitted and you can see the coolant pump and refrigeration unit on the front left of the engine. Note the alternator on the top right of the engine; this was later to be moved to the bottom of the engine on the other side, hung on a bracket bolted to the old fuel pump hole.

We’ll insert another pic of Dave’s beautiful finished product here just to keep your mouth watering for our next installment. Follow along and you’ll see that it really is possible to make a silk purse from a sow’s ear.