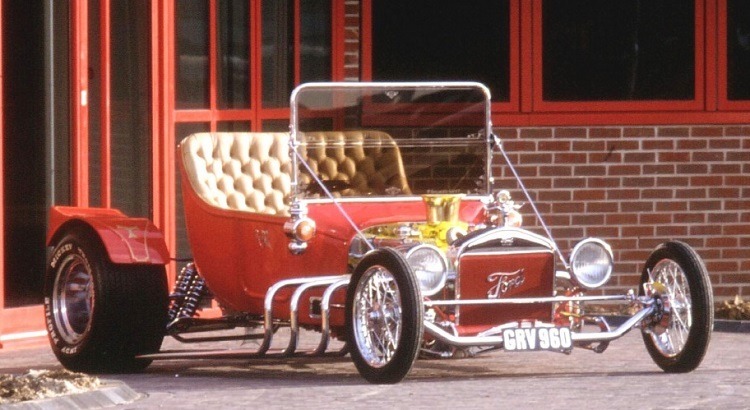 I love British T-Buckets! Take a moment to think about how difficult it is to build a T-Bucket hot rod in the U.K.  The normal T-Bucket components are either few and far between or non-existent. When the components can be found, the price is typically sky high. But despite these huge obstacles, some of the best looking and most creative T-Buckets ever built have been crafted by talented British  builders like Ed Wimble,  Nick Butler and Pip Biddlecombe, among others. What I’ve found is that these British T-Buckets builders thrive on that scarcity. It focuses them on unique design and mechanical features that make their British T-Buckets distinctively different and oh, so enjoyable to look at.

For too long, I’ve overlooked these British T-Buckets builders in my stories here. But that ends now. Several years ago, I noticed a really great looking British T-Bucket that had its roots with an Ed Wimble build for a customer that was never completed. Dave Melling found it and finished it into an incredibly beautiful T-Bucket. What’s more, he meticulously documented the build and when asked was generous enough to permit me to share it with our TBucketPlans.com followers.

This will be an incredible mult-part journey you’ll love and learn from. Our first installment starts with Dave Melling’s words on how the inspiration for this project came about.

My interest in cars, like the Model T  in here, stems from my teenage years when I used to go to Southend seafront and watch the Cruise which took place every second Saturday of the month. I saw it more by accident than anything, as I used to walk to the Palace roller skating rink which I frequented, and that was along the seafront on Pier Hill.

I particularly liked the American cars, especially Mustangs, which consequently led to me buying one at the age of 21. It was a 1973 Mach I fastback, with a 351 cu. in. engine and three speed auto. It was virtually stock and came complete with low mileage and the ‘pink slip’ from the States, showing that it used to belong to Dominigo Carreras of Brooklyn, New York.

The interest in hot rods came from reading the usual magazines and attending the local Custom car show which was held every year at the Southend Airport museum. A regular exhibitor there was ‘The Prisoner’, a local Model T Ford hot rod inspired by the TV series of the same name. The real turning point, or influence, was when I saw Ed Wimble‘s famous Model T Ford hot rod called ‘The Outlaw’, in the window of a car showroom in Leigh-on-Sea. It was so radical for its time (early 70’s I think) it left a lasting impression.

I didn’t really do much about it until the age of 23, when, having owned the Mustang for two years and won a ‘Best Engine’ award for nothing more than a bit of paint and chrome, I decided that building a Model T was ‘worth a go’.

Dave Melling’s T-Bucket project gets going in our next installment.