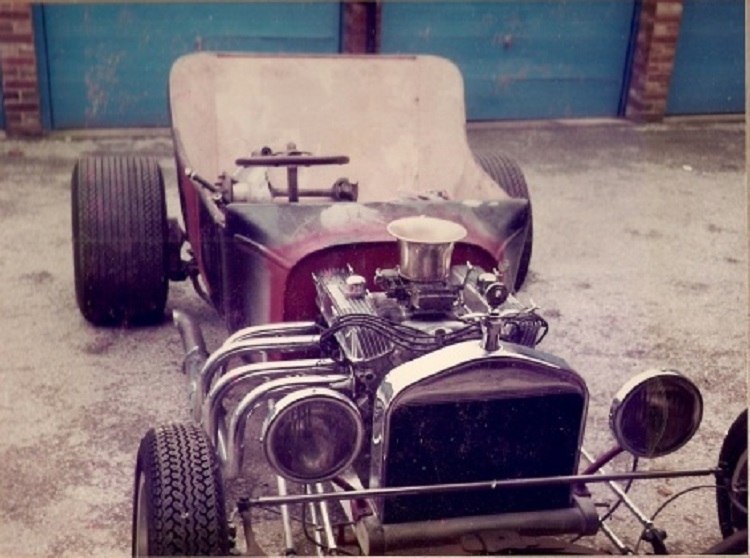 Finding and buying T-Bucket parts is an important part of any T-Bucket build. Dave Melling was very lucky to find a bargain unfinished T-Bucket project which just happened to come with a lot of extra T-Bucket parts. Here we see the car in the garage, showing how much clearance there is either side of the wheels. This is going to get a lot tighter once the Mk 10 Jag back axle has been fitted. The Jag rear-end is nice and exposed on the car, although the hub carriers could do with cutting down a bit to expose the U.J.’s [U-joints] at each end.

The body has a high back to it, although it was apparently taken from a mould of a real Model T body [see our story on the 1915 T-Bucket body].

The tyres on the back, by the way are Mickey Thompson Indy Profile 500 series bias belted radials. They measure about 14″ across, although the tread on the top measures about 12″ across.

The pile of bits in the front of the photo are some of the bits that I got when I bought the car itself. You’ll see them below in more detail. This view shows, again, the narrowness of the back axle — if it wasn’t for the fat rear tyres, the front would be in danger of being wider than the back! You can see the reproduction Model T steering wheel, and the bits of plywood nailed to the inside of the body as a kind of lining. It will need a proper upholstery insert before any upholstery can be done.

There is also a piece of Jag rear end in the body, as I got yet another S-type back axle with the car as a spare. Both S-types were later sold off after I had rebuilt my Mk 10 back axle. This photo also shows the top half of the engine quite well — it is equipped with an Offenhauser manifold and rocker covers, Holley carb and Cal Custom velocity stack, wing bolts and rocker box breathers. This photo shows some of the parts that I got with the car which made it worthwhile buying. Here we see two chromed Jag discs, a wishbone, hub carrier and the propshaft [driveshaft], which is a mixture of Rover flanges and a Jaguar splined shaft. Only the propshaft would eventually be used, although it had to be re-welded because it had a crack in it. The chrome plating on the other parts was not up to my standards! These photos show the T-Bucket parts I got with the car when I bought it. The main reason for purchase was the car itself, with the wheels, tyres, etc. already supplied, but these small T-Bucket parts add up to a tidy sum, too! The above photo shows the Jag discs and the propshaft again, but also the oil cooler and hoses for cooling the automatic gearbox oil. There were lugs already in place on the chassis to hold the oil cooler. This photo shows the two reproduction rear lights, the wheel spinners, and a few of the Cal Custom bolt-ons, such as spark plug lead harnesses. This last photo shows some of the Jag rear end parts from the second S-type axle, also the chromed differential casing, and a handbrake.

As we continue with Dave Melling’s T-Bucket project you’ll see how he puts some of those extra Jaguar rear end T-Bucket parts to use.