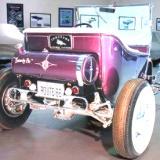 With a $200k high bid not meeting reserve at the Mecum 2010 Monterey Auction, the legendary Tweedy Pie T-Bucket made famous by Ed “Big Daddy” Roth and originally constructed by Bob Johnston goes back on the block January 21, 2011 at RM Auctions annual Arizona Biltmore event. As noted in our previous posts about Tweedy Pie, this is the T-Bucket that captured the imagination of millions of young model car builders in the early 1960s. Tweedy Pie is shown on the RM Auctions site as one of the “Feature Lots” for Friday and it’s sure to draw the biggest crowds of the event during the previews. Let us know if you’re planning to attend this event in Arizona because we’d like to feature some shots from an at-the-scene reporter.