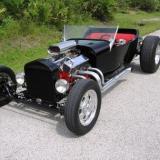 After a lousy midwestern winter weekend with blizzard conditions, my mind drifted back to my great spring visit to the Sun T’s of Central Florida show and cruise at Old Town in Kissimmee. I’ve done posts on a couple of the notable T-Buckets from that event, but felt guilty that I hadn’t gotten around to posting about probably the most striking car there, simply because I felt my photos were sub-par. So, I’m getting over that hump by adding a couple of other people’s photos to this post because I just didn’t have one that reflected the beauty of Jim Hoffman’s T as well as the shot above. Jim likes to refer to his bucket as “Ex Junk”, but I think Jim’s definition of junk rests on a higher plain than my own. While Jim may describe his T-Bucket as being built on a budget, it’s quite clear that he didn’t scrimp when it came to detail, because this car is loaded with clean, functional and eye-pleasing details aplenty. At first glance, you might think this a ’27 T, especially if you look at the cowl and the windshield posts. The somewhat rare turtle deck tends to reinforce the ’27 image from a distance. But, it’s really a ’23 T that’s been the beneficiary of much innovative fabrication by Jim and his son. It all starts with a meticulously well-engineered and constructed chassis, suspension, engine and driveline package. The strategic mating of the ’23 turtle deck a bit higher on the channeled body is a subtle touch that pays off big in terms of overall appearance. Not to be overlooked is the rolled rear pan and how nicely the coil-over-shocks blend in. This T-Bucket’s interior is something you can spend an hour admiring, starting with the contrasting red upholstery and carpet. You’ll notice that the body has also been stretched a bit and the seat is quickly taken out for easy access to the immaculate underpinnings. The engine turned dash and full complement of gauges are nicely accented by an innovative chrome molding technique Jim discovered. As your eyes move to the super sanitary engine you’ll note the chrome molding enhancement has been carried over to the valve covers. To me, what’s most striking about this car is its subtlety. Nothing sticks up, hangs down or looks like an afterthought addition. Every element of Jim’s car was designed to work in perfect harmony with the others; and that’s why I had such a hard time getting around to this post. I just didn’t have what I felt was the right photo to capture its overall effect. But, maybe photos don’t really do it justice. On reflection, seeing this car in person is what reveals its really dramatic good looks. While Jim might modestly claim his T-Bucket was really constructed from Ex Junk, then it’s likely he’s found the formula for making a silk purse from a sow’s ear. I hope you have a chance to see this car up close and personal — it’s a T-Bucket learning experience in itself.