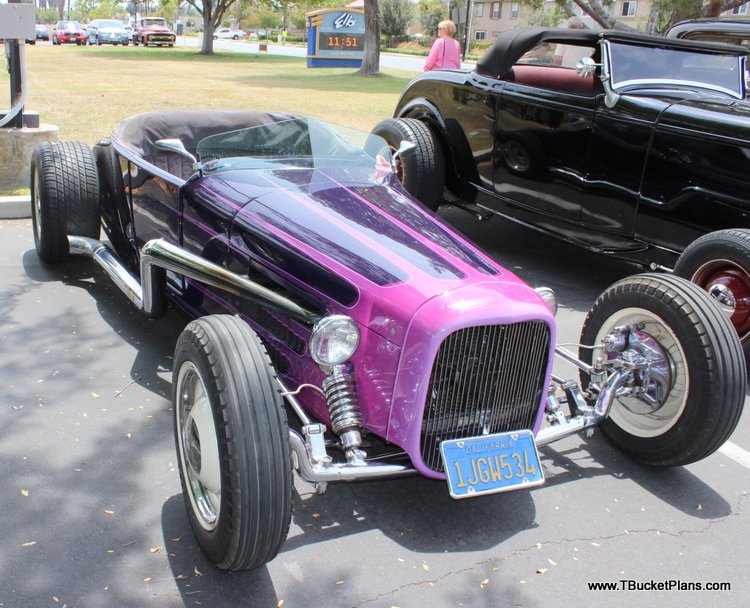 Bob Smith‘s 1927 Track T Roadster is dramatically unique because it looks to be only about knee-high. For comparison, take a look at Bob’s other street rod, the black ’32 highboy parked next to it. This track T roadster was another great find at the recent San Diego Prowlers 68th Picnic and Ol’ Timer’s Reunion. And like Jim Reid’s Model T Lakes Modified, Bob’s track T is based on his past T-Bucket hot rod experience. Bob’s first T roadster started out as a dry lakes racer in the 1940s and had been owned by two other San Diego Prowlers members when Bob acquired it in a trade for his 1940 Ford coupe in the 1950s. After Bob worked his magic on it his first T roadster appeared on the cover of Hot Rod magazine in 1958 and over the decades would appear in numerous other magazines up to The Rodders Journal in 1999. In the mid to late 1960s Bob built a great looking steel 1923 T-Bucket with an abbreviated Cushman Hauler pickup bed. With lots of chrome and psychedelic looking flames, Bob’s T-Bucket appeared in Rod & Custom magazine in 1970. After that, Bob built a 1915 Model T center door sedan which he sold in 1978 and then took a hiatus from hot rodding. By 1982, though, the hot rod bug returned to Bob’s system and he set out to return by reviving a 1927 T roadster body that he would build into a dramatically different Track T roadster. To achieve his goal of producing a super low Track T roadster, Bob had to fashion a frame with a radical rear kick up as well as a significant front kick for the proper “in the weeds” look. With coil-over-shocks and four-bar front and rear suspension, Bob was set for some low down, comfortable Track T roadster handling. The proportions of the chopped Deuce grill shell and sleek hood really set off the lowness of the Track T. The frenched license plate and tail lights make for a nice clean look at the rear. As you’ll notice from how the carpet blends into the seat upholstery, to achieve this degree of lowness you’re basically sitting on the floor, with a bit of padding. The V’d frameless windshield that Bob created is one of this Track T roadster’s most distinctive elements. In essence, the windshield is virtually invisible and very much in keeping with the Track T theme. But what’s maybe not so obvious is that there is actually plenty of leg room with the floor-level seating. The louvers and stylish chrome vent allow some nice air circulation out of the enclosed engine compartment. Of course, the sweeping Track T headers are key to the overall look, while allowing internal mufflers to keep sound at a reasonable level while still sounding plenty tough. At the beginning, I mentioned that Bob Smith is also the owner of a beautiful Deuce highboy. Coupled with his past T building experience, that makes his comment on the versatility of the Model T body compared to the venerable ’32 Ford incredibly authoritative, “Really how many ways can you do a ’32 roadster? hi-boy, low-boy, fenders or without…that’s about it”. Bob’s built a T-Bucket and two other T roadsters that are as different as night from day and I enthusiastically support his observation on the multifaceted possibilities with T bodies.