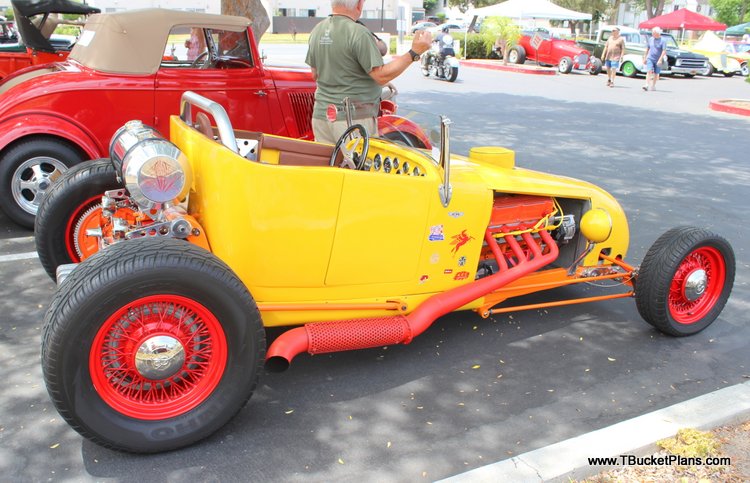 While it looks like a Model T Lakes Modified roadster of the late 1940s, this third T roadster creation of Californian Jim Reid is the result of a seven year build that hit the streets in 2008.

But first some background on Jim and his love of hot Model T roadsters. Jim has been a member of the San Diego Prowlers for 47 years and the club’s President the past four years. After discovering that engine and tranny combo weren’t the most reliable when it came time to delivering performance, Jim undertook a major rebuild. With a new frame under the old ’27 T-Bucket body, a modern Shelby/Cobra V-8, automatic transmission and bright red paint job, Jim’s second T build was a very fast, dependable T-Bucket that took him to roadster runs all over Southern California, up until the early 1970s when it was parlayed into the down payment on a home for a growing family. Fast forward three decades.

As Jim said, “After 32 years of watching hot rods cruise past my house on Sunday afternoon while I was mowing the lawn, I started a third roadster in 2001.” With his new 1927 Model T Lakes Modified build Jim “wanted it to capture elements of the late 40’s home-built Model T modifieds of the dry lakes, salt flats and dirt tracks.” A look he has very successfully achieved. Up front the fabricated track nose is nicely complemented by the traditional dropped I-beam axle flanked by finned aluminum Buick brake drums. A monoleaf spring, though, is not only a concession to a more smooth ride but also a cleaner look. I particularly like the attention to detail Jim showed in the fabrication of the very nicely curved rear kickup that follows the Model T body lines so well. To me, a lakes modified is all about how the rear looks and Jim’s got it all going on with some beautiful friction shocks, the wildly striped fuel tank and the exhaust dumps right before the big rear tires with just the right track-type tread design. The low roll bar is another great touch that evokes Model T Lakes Modifieds of years gone by. What’s also clear here is the nice rake that is in part due to the big and little, rear 17″ and front 15″ traditional looking wire wheels. The modified theme continues to the interior with a Bell type four-spoke steering wheel and a full complement of vintage Stewart Warner gauges. True to form, the shifter attaches to a 4 speed aluminum toploader. Hey, who wouldn’t want to hear a great looking Model T Lakes Modified like this going through the gears?! The Model T windshield has been chopped to half its original height. Jim wanted to use designs and, in some cases, parts that would be true to early race cars and his use of an early Schroeder racing steering box with the sector shaft out of the body meets that criteria. For reliable, modern performance Jim went back to his own T-Bucket roots and chose a 302 Ford engine. And to make the best use of old parts blending with new technology he chose a four bar suspension to limit caster change with the I-beam axle. Jim Reid’s Model T Lakes Modified was just one more of the fine T’s that made my visit to the San Diego Prowlers 68th Picnic and Ol’ Timer’s Reunion a really enjoyable one. It’s an event not to be missed.